The Ilyushin Il-102 was a last-ditch attempt by the Ilyushin OKB to design a jet-powered successor to their famous wartime Il-2 'Shturmovik'
In 1953 they flew the twin jet Il-40 'Jet Shturmovik' and although it never entered service, it was assigned the ASCC Reporting Name 'Brawny'... 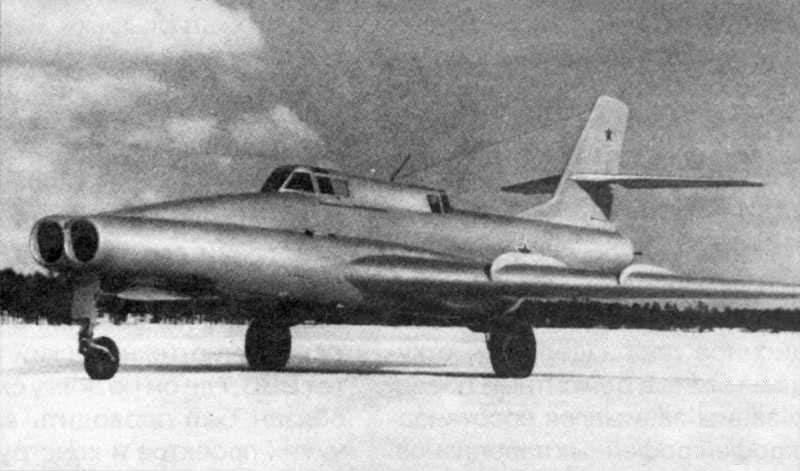 Nothing more was heard of the Il-40, until the first Mosaero Show, held in Moscow in 1992. Here Ilyushin revealed to an astonished
press the decidedly anachronistic Il-102 - that had cleary been evolved from the Il-40 as a private venture.

Another view of the prototype showing the rear gun turret and gunners position.

Nothing more has been heard of this project - and in 2001, I photographed it languishing on the Ilyushin ramp at Zhukovsky... 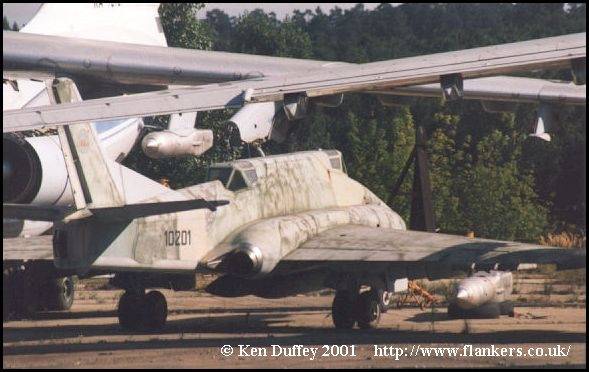 
The model is scratchbuilt using plasticard for the fuselage with wings, fin and tailplane scavenged from the spares box.
I found some very useful 1:72 scale drawings that included cross-sections, so I set about making a model of the Jet Shturmovik..... 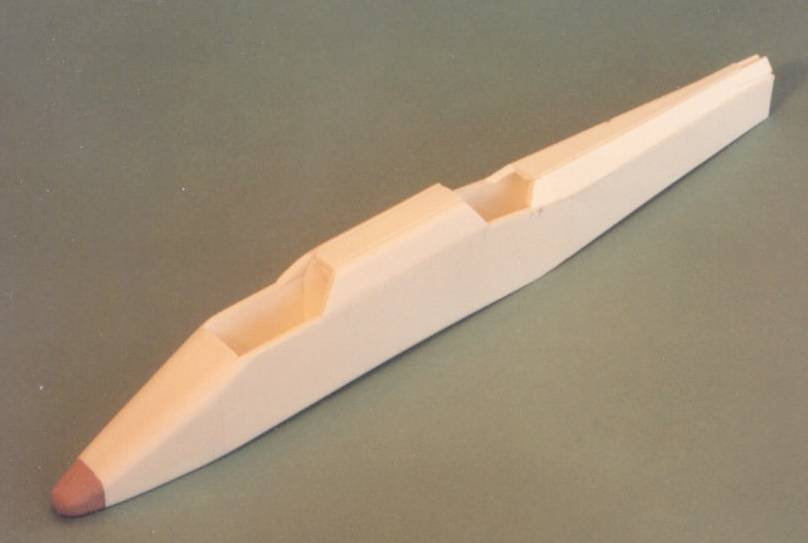 The fuselage is essentially a box-section with rounded corners and a tapering top. 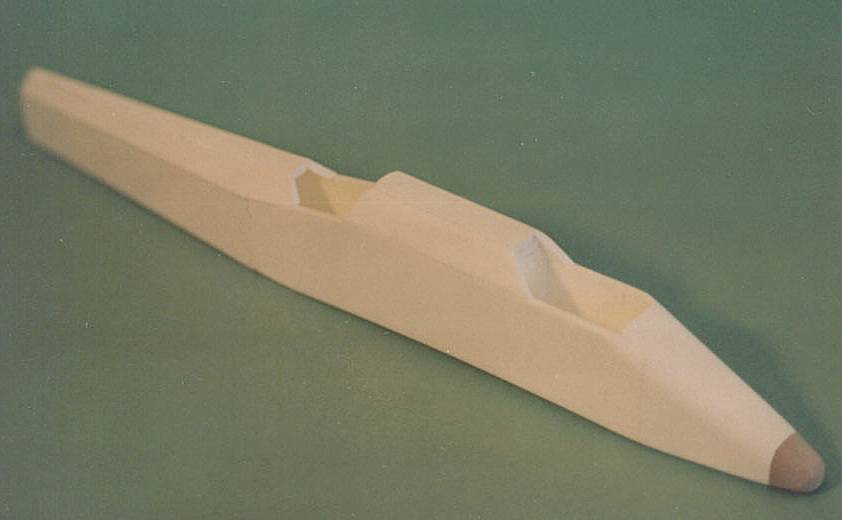 The nosecone is made from Ureol modellers wood, carved to shape. 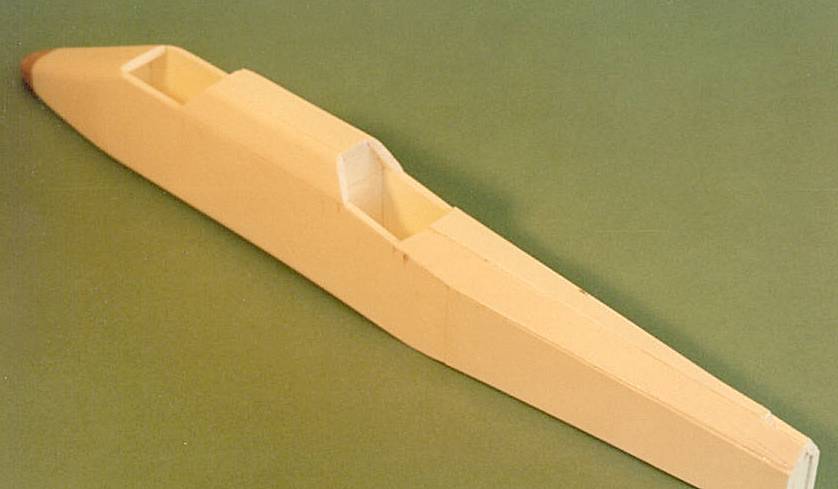 I made bulkheads using the cross-sections on the drawings 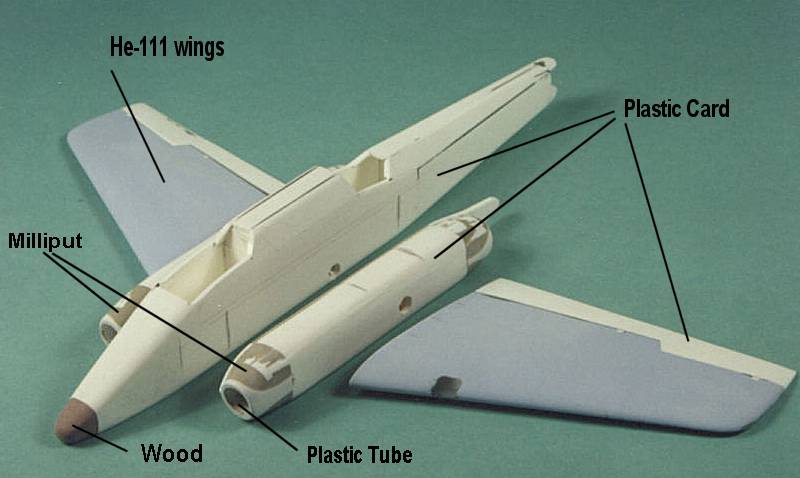 Here are the main components of the model. The fuselage is thick plastic card, the engine nacelles are thick
card 'boxes' with rounded corners. Plastic tubes are added at front and rear - all blended in with Milliput filler.
The wings are made from a 1:72 scale Airfix He-111 kit that I just happened to have lying around.
They looked about the right plan shape and airfoil section. The wing trailing edges are thick plastic card.
The holes in the fuselage and engine nacelle are for a tubular spar that fits into the wing recess  to provide strength. 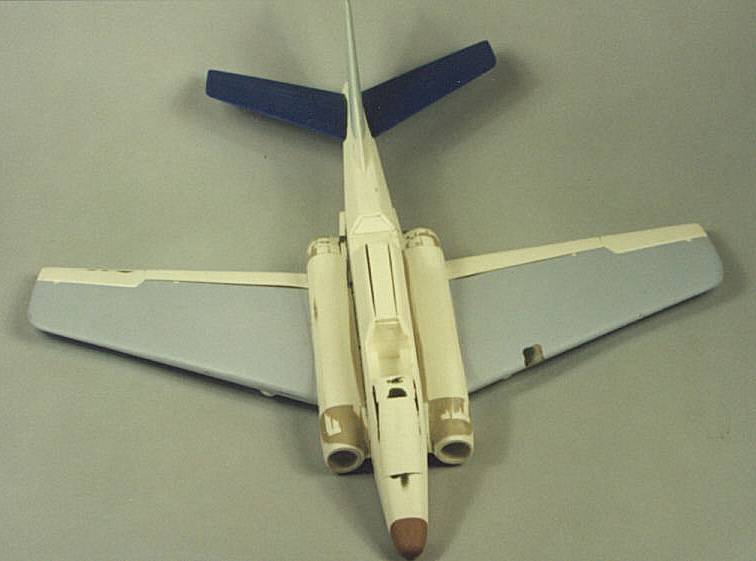 All the components brought together - the tailplane came from the wings of a 1:72 scale F-86 (I think). 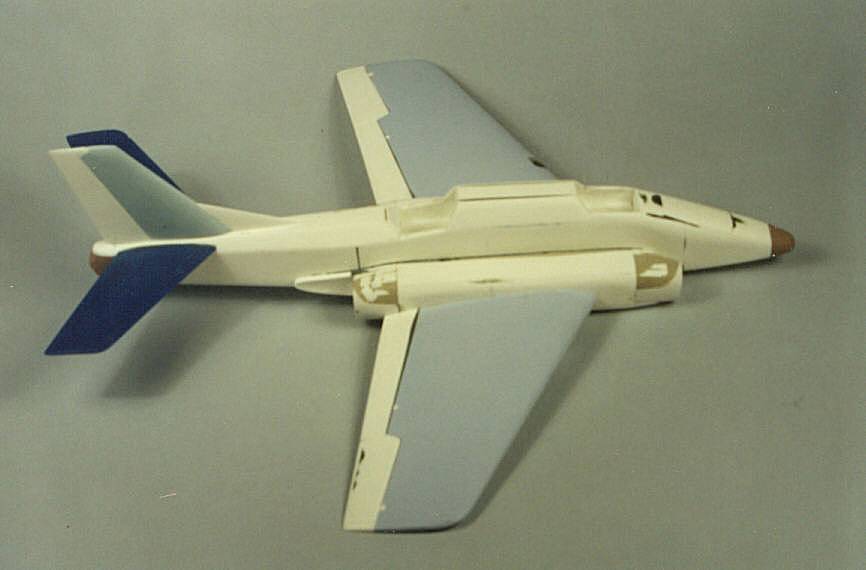 I can't remember where I got the fin - I just combed through my spares box until I found a suitable shape. The rudder
and dorsal fillet are plastic card. 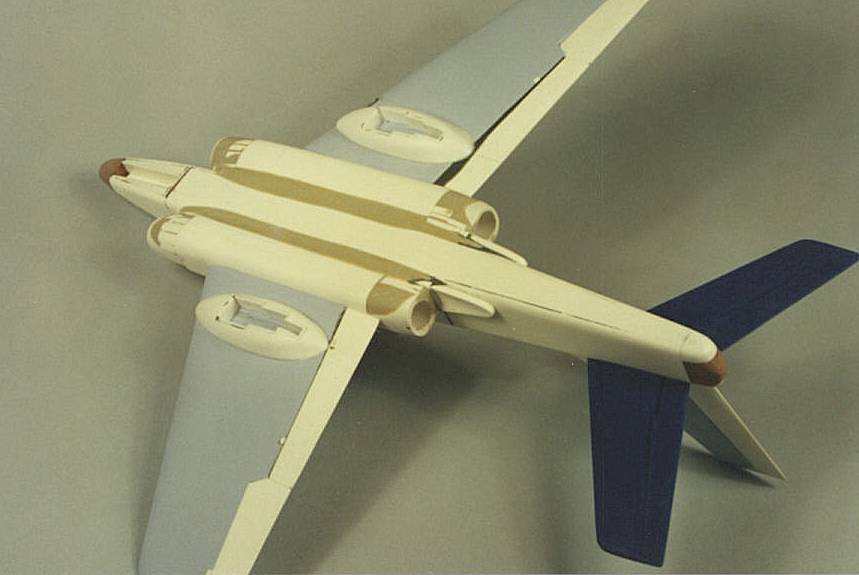 An underside view of the model. The mainwheel fairings were plug-moulded from a wooden master and have the wheel
wells boxed in - as is the nosewheel well. The rear turret is carved from Ureol. Note the copious amounts
of Milliput to blend in the nacelles to the fuselage underside. 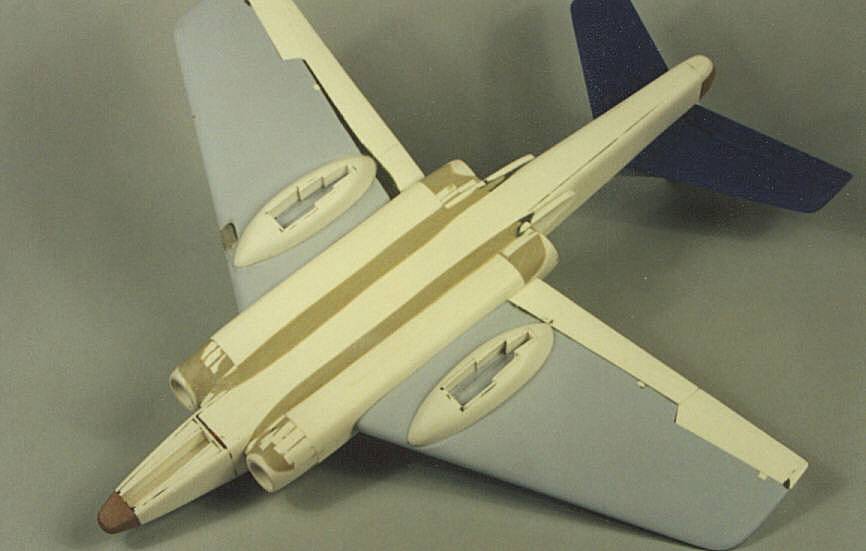 Another view of the underside showing the wheel wells and Milliput. 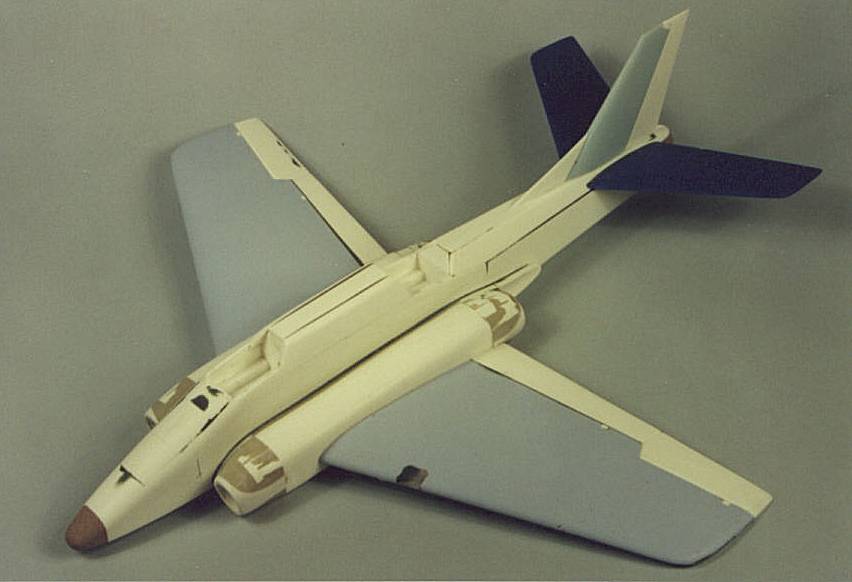 Just a final clean-up and it's almost ready for a coat of primer. 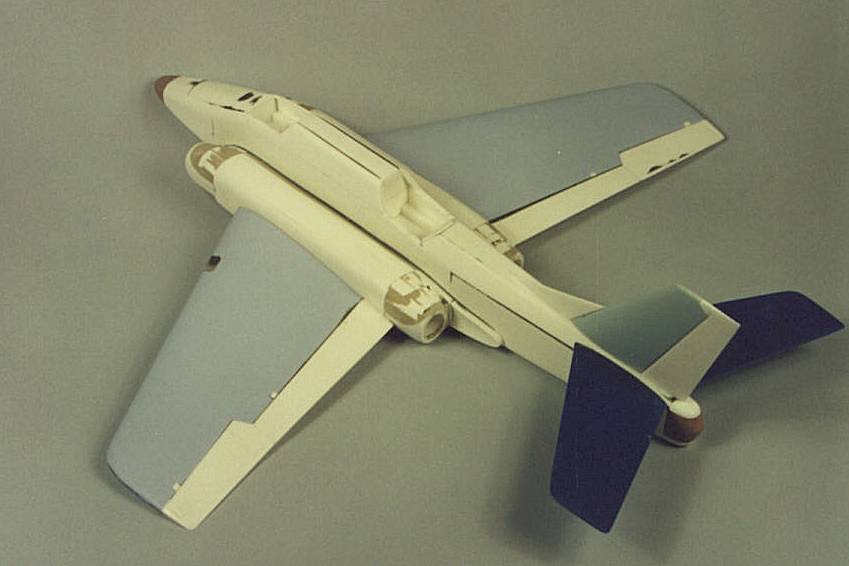 I haven't detailed the cockpits yet - but I have added side consoles from square-section plastic. 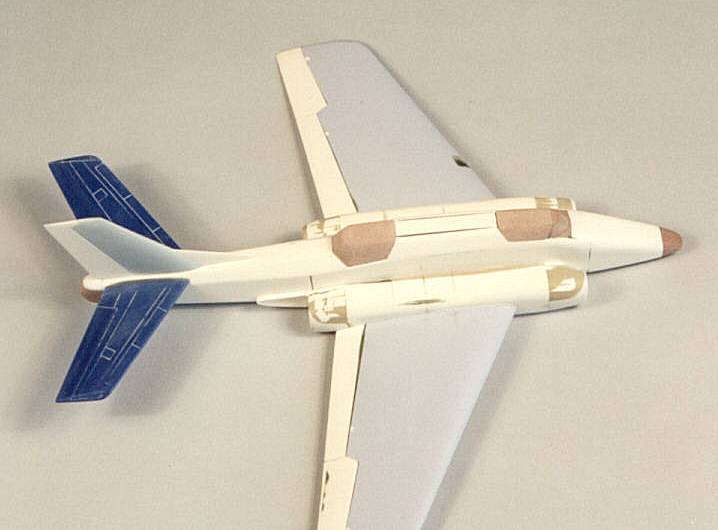 Here I have added pieces of Ureol wood to the two cockpits and sanded them to shape. Once removed
they served as masters to plug-mould clear canopies. 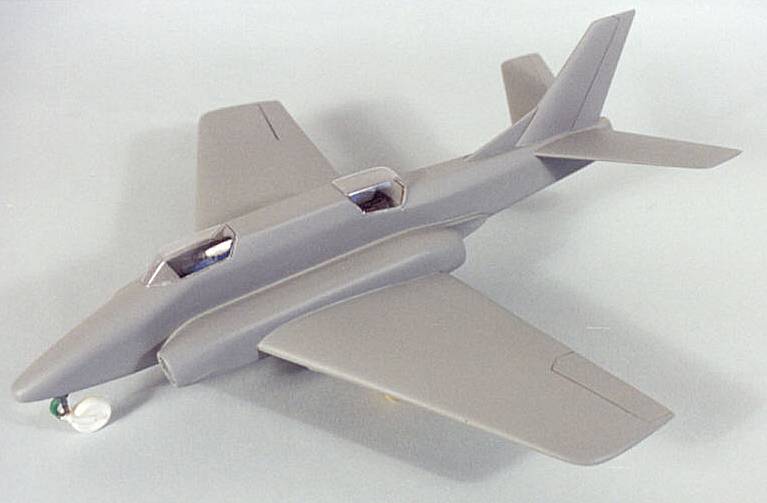 A first coat of Halfords Grey Plastic Primer and a test-fit of the plug-moulded canopies. 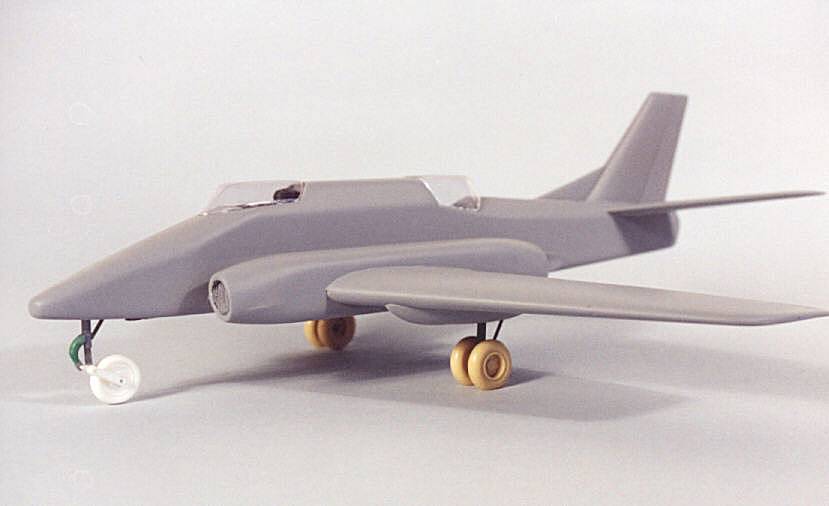 The main & nosewheels legs are fabricated from plastic rod and sprue. The mainwheels are some resin copies from
an unknown donor kit wheel - the large nosewheel is also from an unknown source. 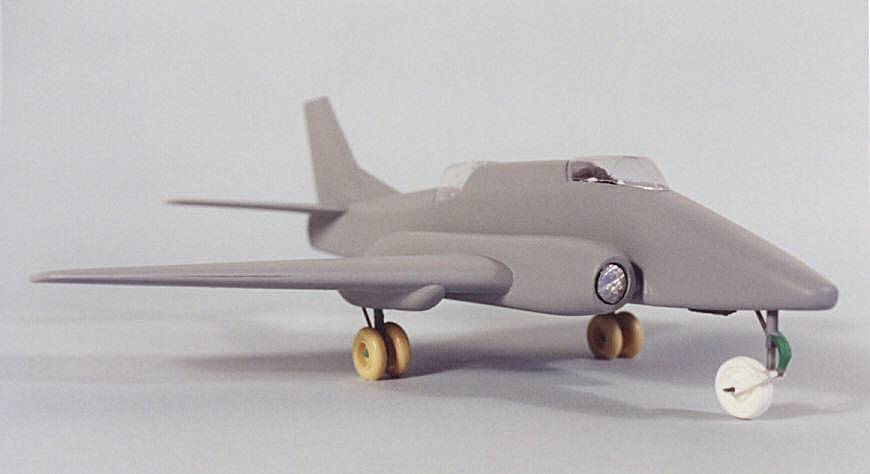 The model proved to be a tailsitter, so here I have stuffed the intakes with lead. 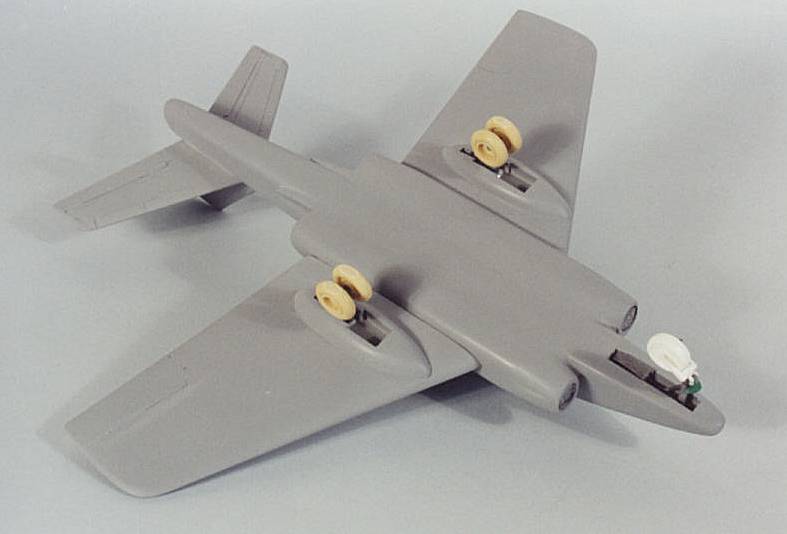 Underside view of the model in grey primer. 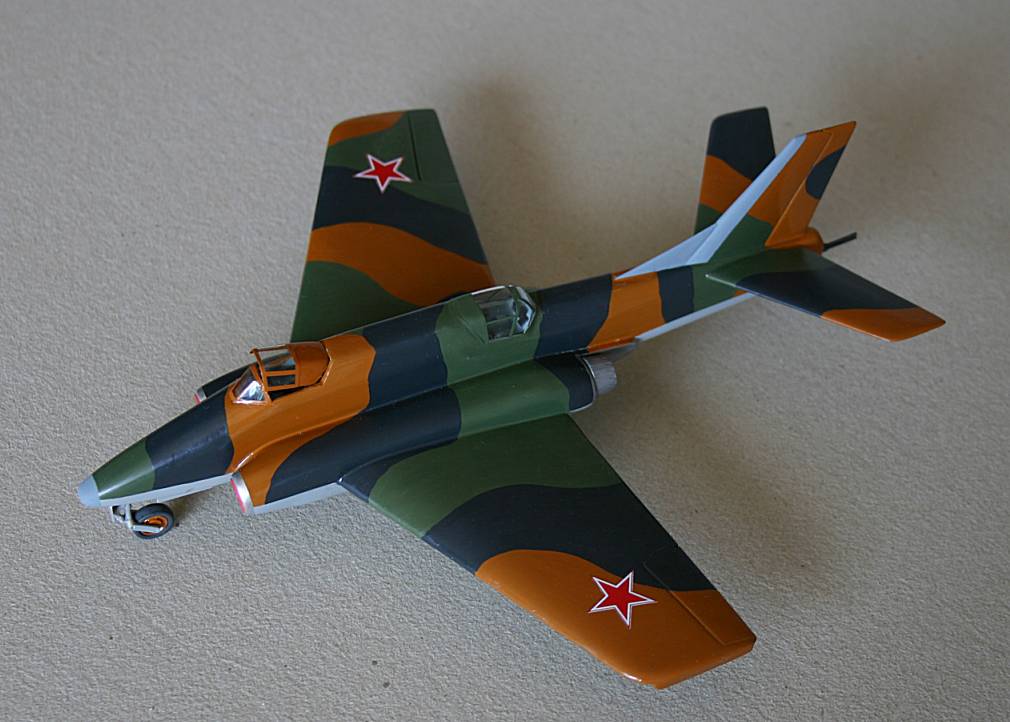 The finished model  in its strange camouflage colours. I am totally unhappy with the finish - it was rushed to get it ready for a model show.
I intend to strip it down and re-apply the camo scheme using better matched colours. 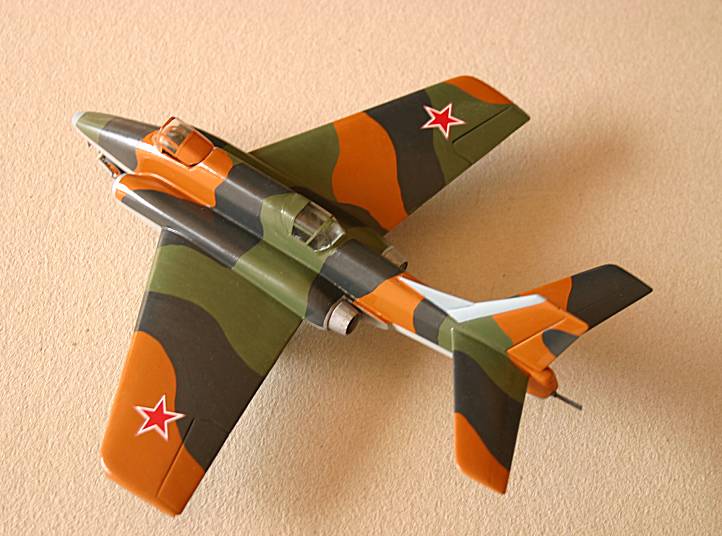 I also need to replace the jetpipes - they are not like this on the real thing. 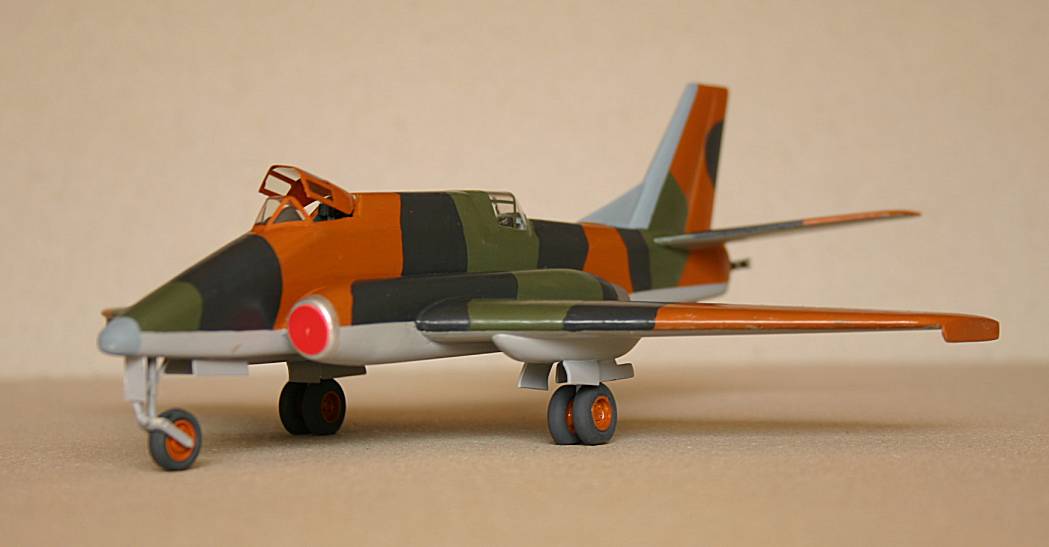 The intakes are blanked off to hide the lead inserts. Following its re-paint, I will add some underwing stores..... 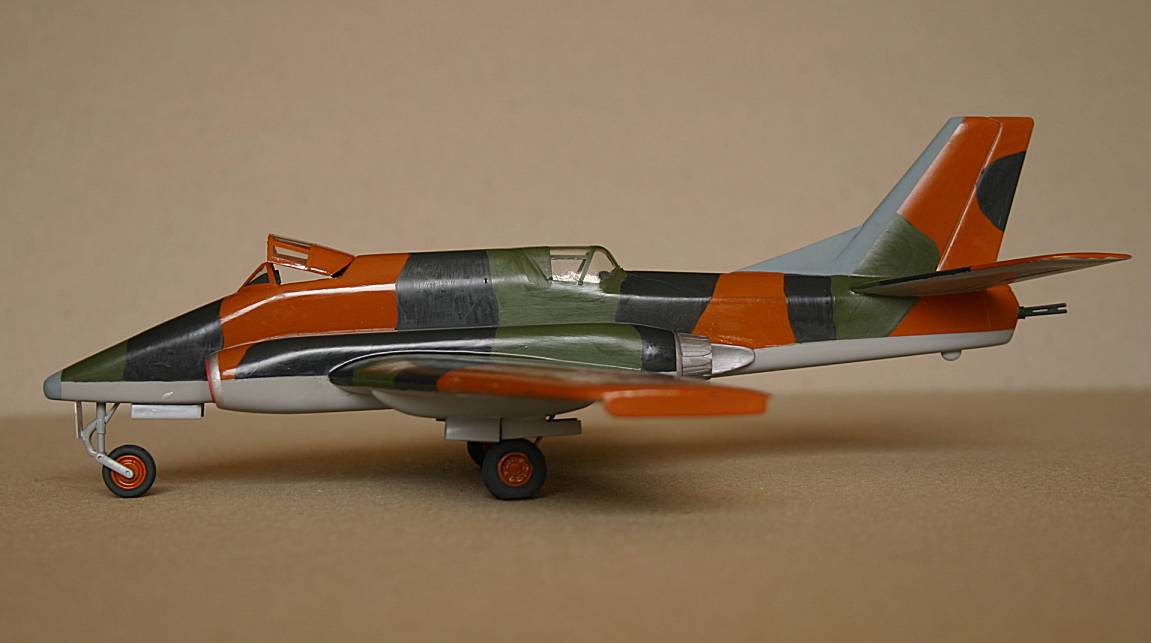 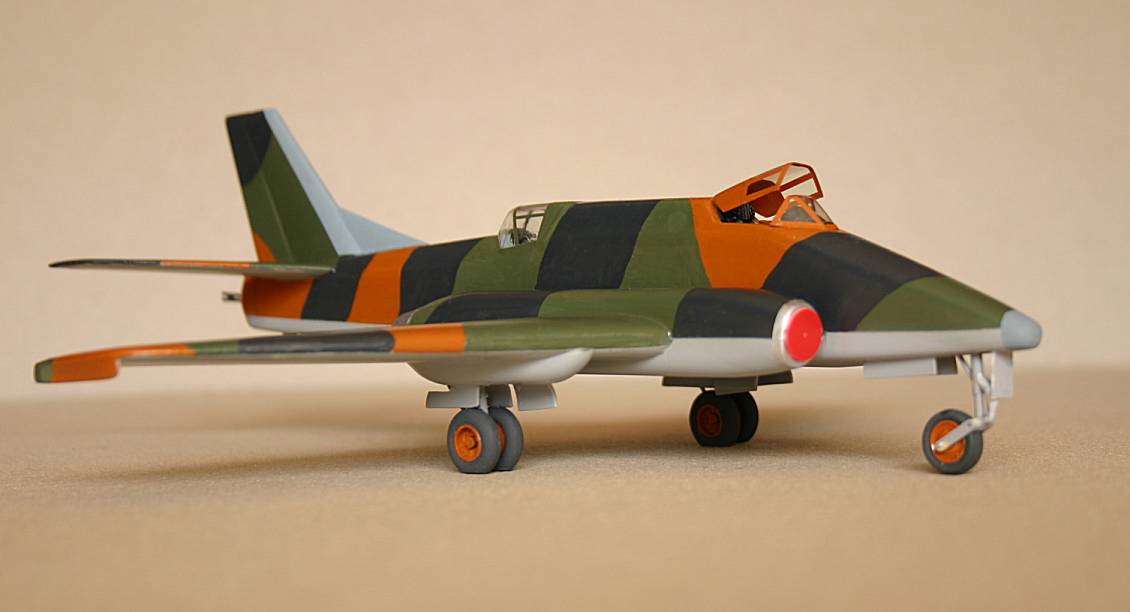 Still, it looks a bit like an Il-102 doesn't it? The cockpits are detailed with instruments from spare decal sheets and resin K-36 ejection seats.

There you have it - it is a reasonably accurate representation of an Il-102 in 1:72 scale, let down by a rushed application of a paint scheme.
As soon as it is stripped down, modified a bit and fitted with underwing stores, it should look good alongside a Su-25.

The machine from which it evolved, the Il-40 Brawny, is now available in resin from Unicraft models :- http://www.geocities.com/unicraftmodels/on/il40/il40.htm
I may just purchase one to go with my model....