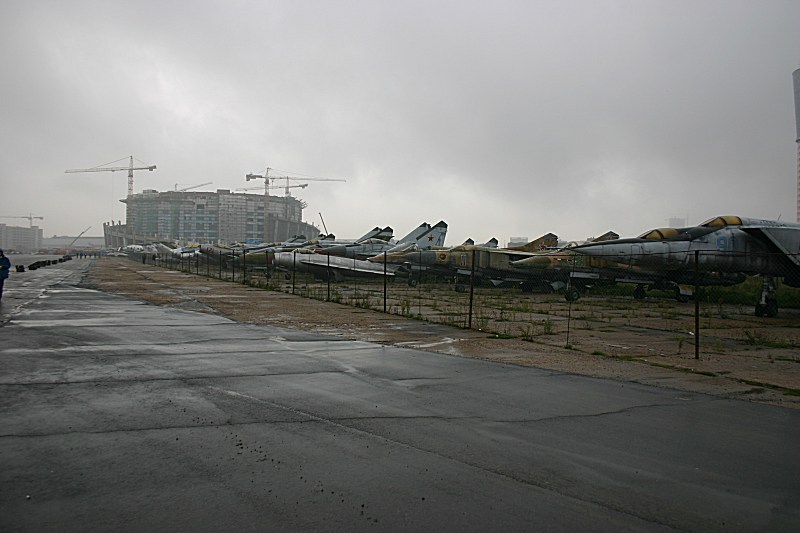 This is the once superb Khodynka museum - all the airframes huddled together behind a chain-link fence.
The old famous airfield named after Frunze is now a building site - and the prospects for its survival are as miserable as the weather. 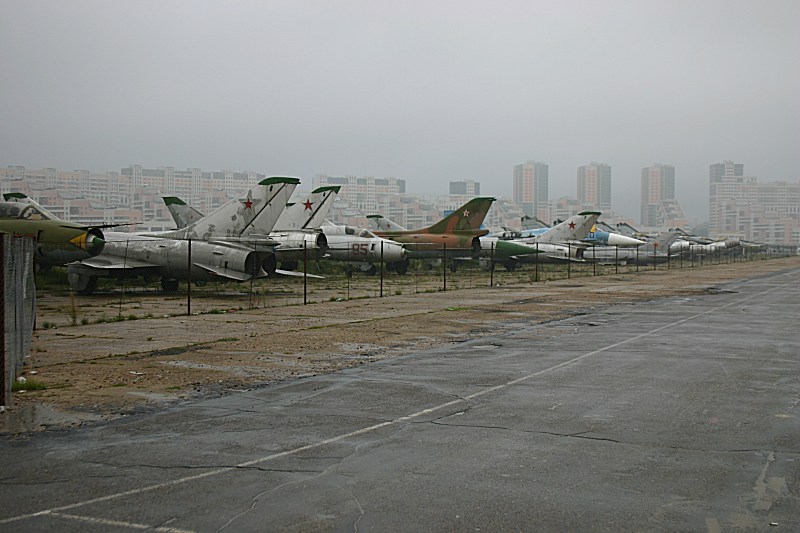 A lineup of the museum exhibits suffering from the ravages of time and the elements. 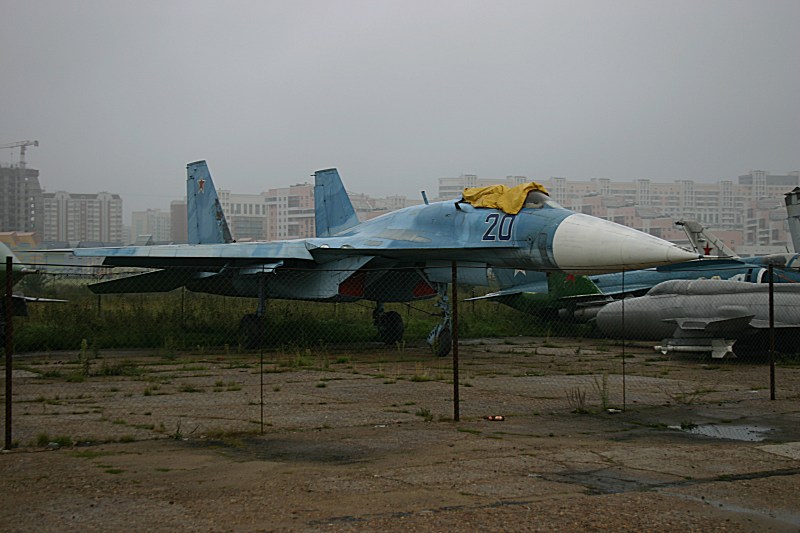 The rare, one-off Sukhoi T-10-20 minus its canopy. A depressing sight. 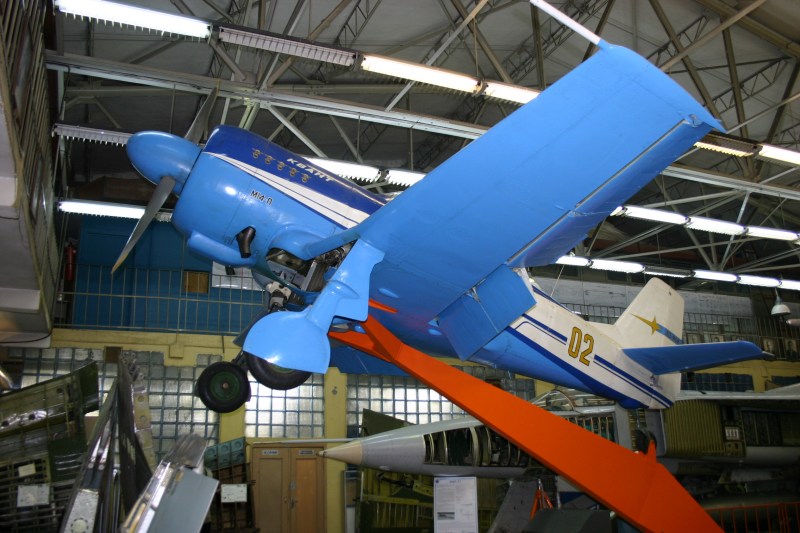 Amongst the treasure-trove of exhibits at MAI is this aerobatic single-seater designed by the students in 1967.
It is named 'Kvant' (Quantum) and hangs just above the entrance. 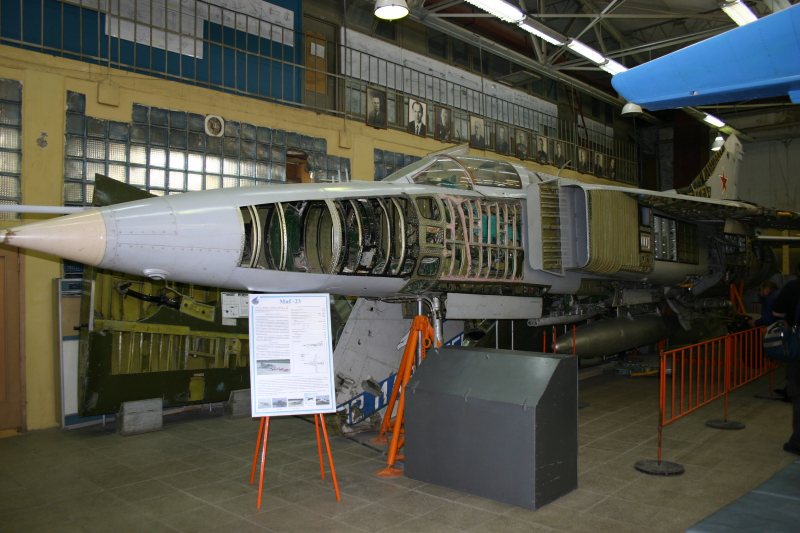 A stripped-down MiG-23 showing the airframe structure. The airframe has a working wing sweep and retractable
undercarriage - complete with folding ventral fin - which was demonstrated to us. 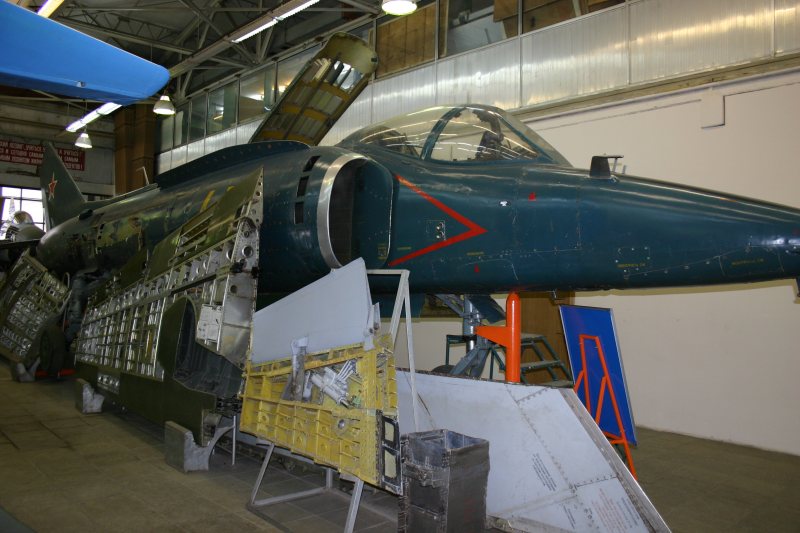 Alongside the MiG-23 is this sectioned Yak-38 - with various examples of wing structures surrounding it. 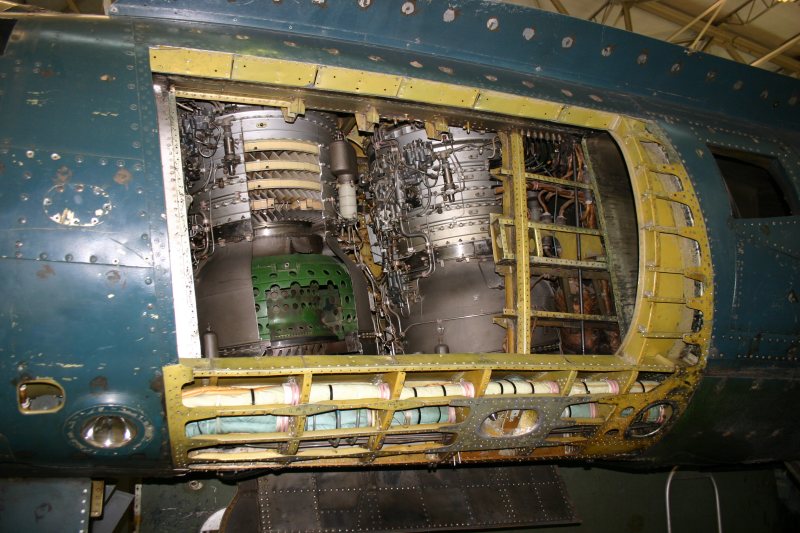 The 'exposed' side of the Yak-38 showing the two RD-36 lift engines installed behind the cockpit. 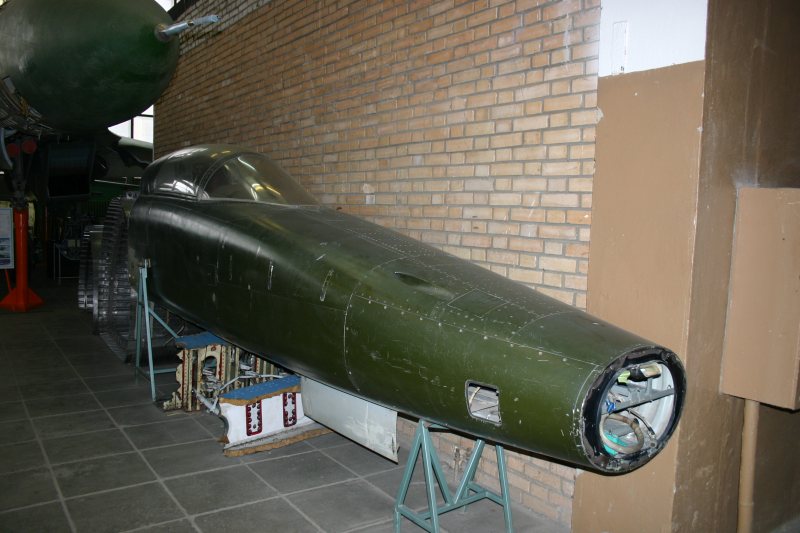 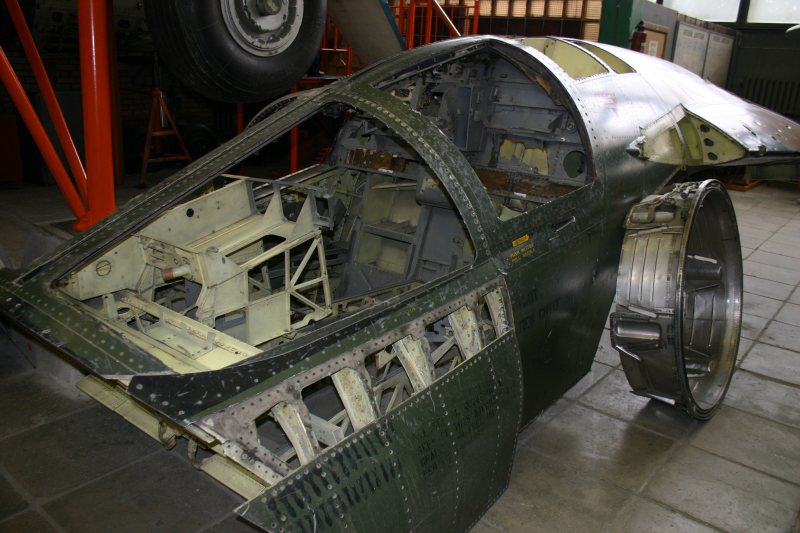 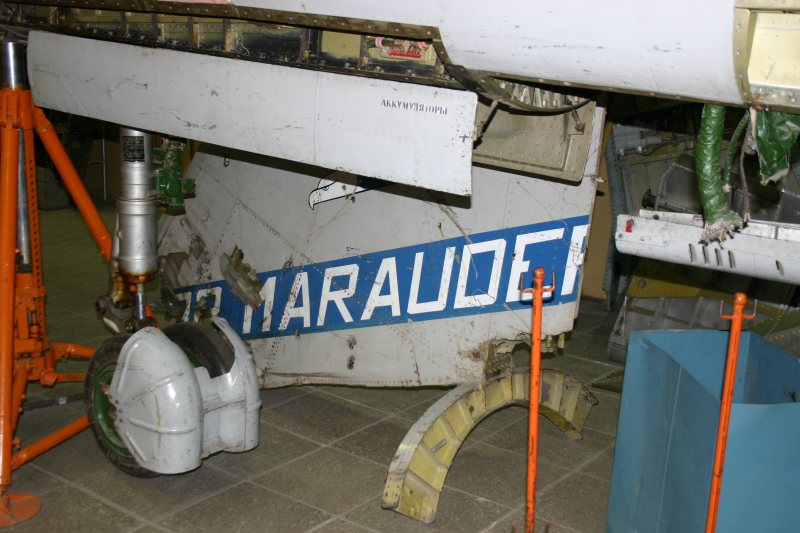 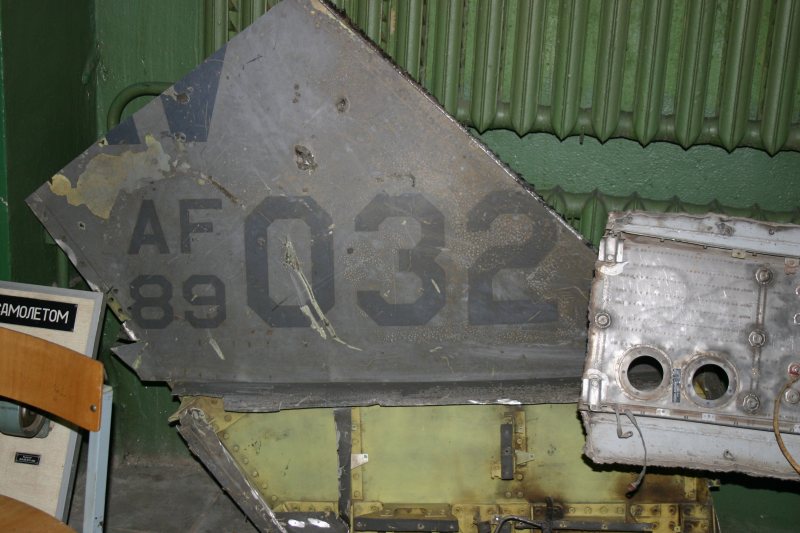 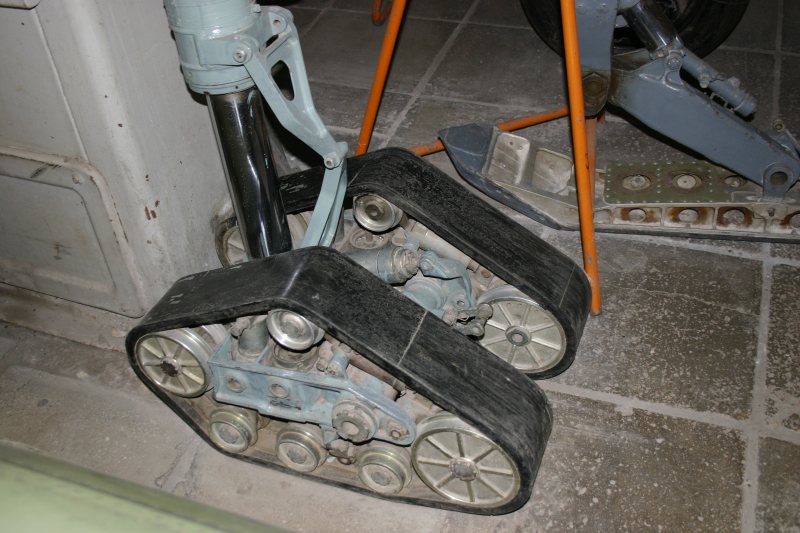 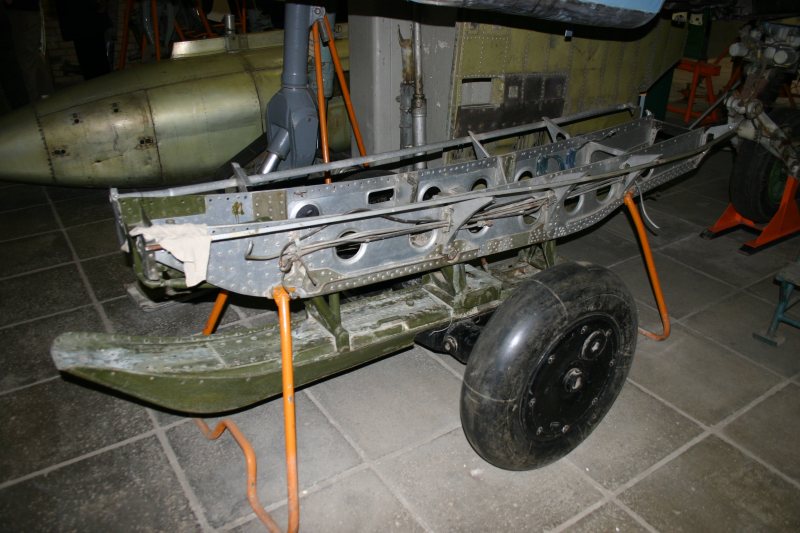 Skid & takeoff dolly from a Messerschmitt Me-163. 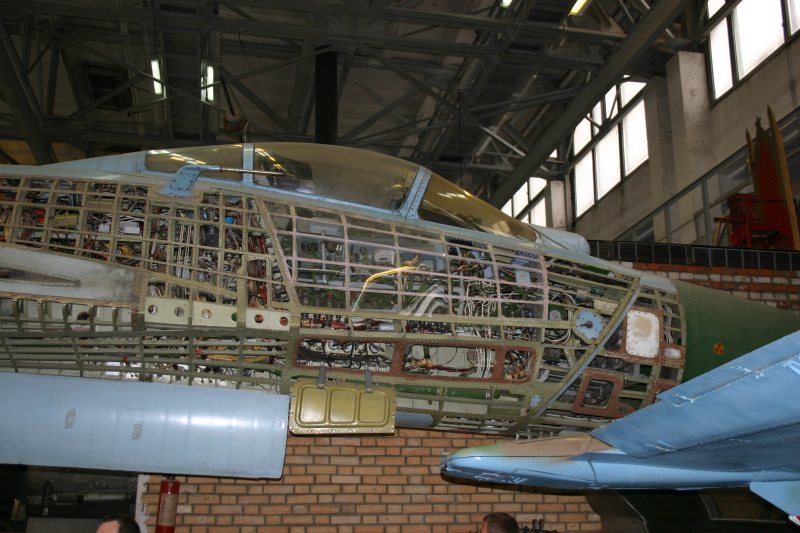 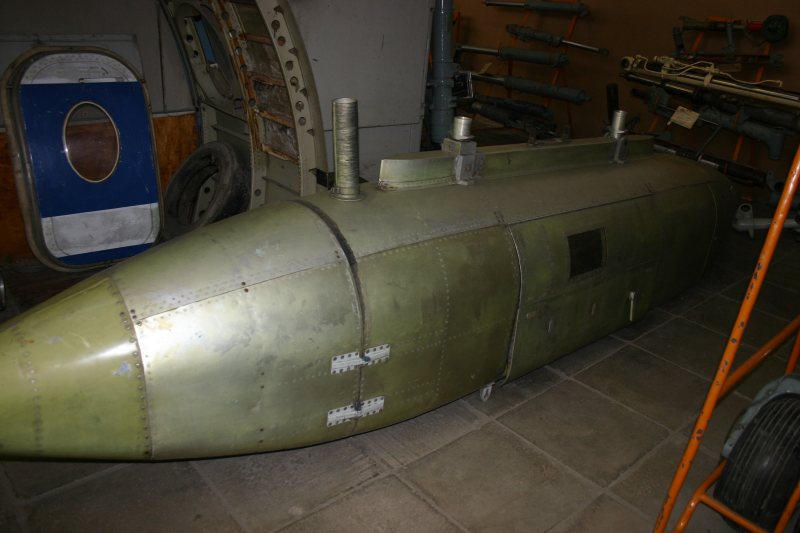 No - not a recce pod - but an experimental personnel pod designed to be fitted to a Su-25. 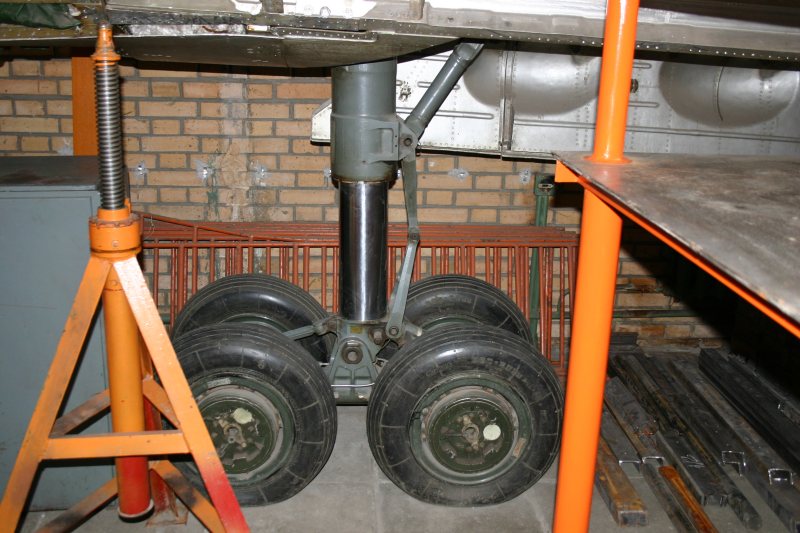 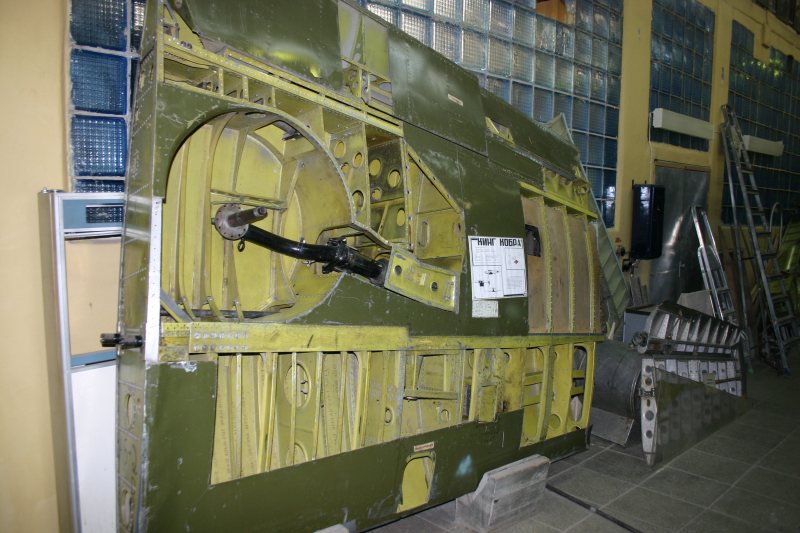 Wing structure from the Bell P-63 King Cobra. There were dozens of these gems dotted around the walls. 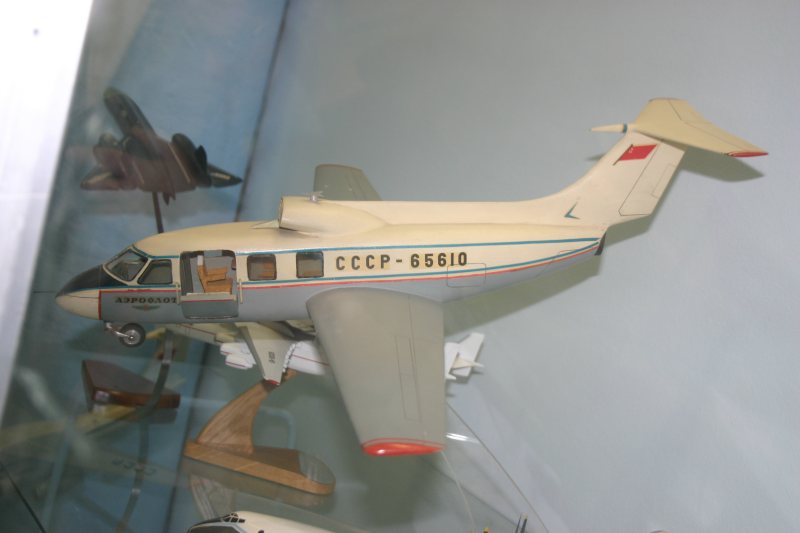 Finally, in a glass case by the entrance there were a number of models made by the MAI students.
This one appears to be a bizjet that looks like it might be based on the L-29 Delfin trainer. 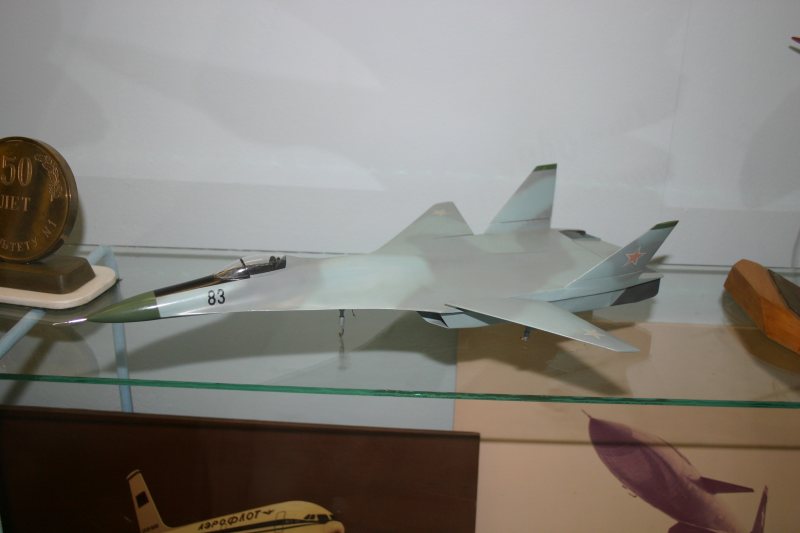 Another anonymous model - this time a rendition of the MiG 1.44 perhaps? 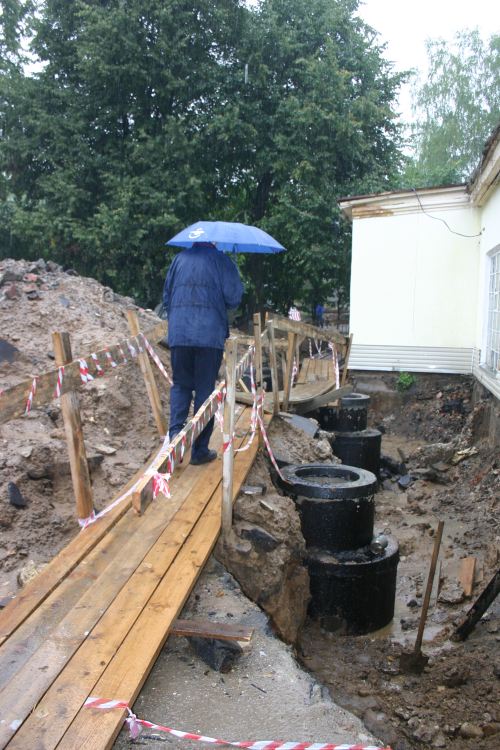 The main buildings at Monino are being rebuilt - and when we asked to use the
toilets, we were led across this rickety, slippery bridge to the new facilities.
I just hope it is open by next year! 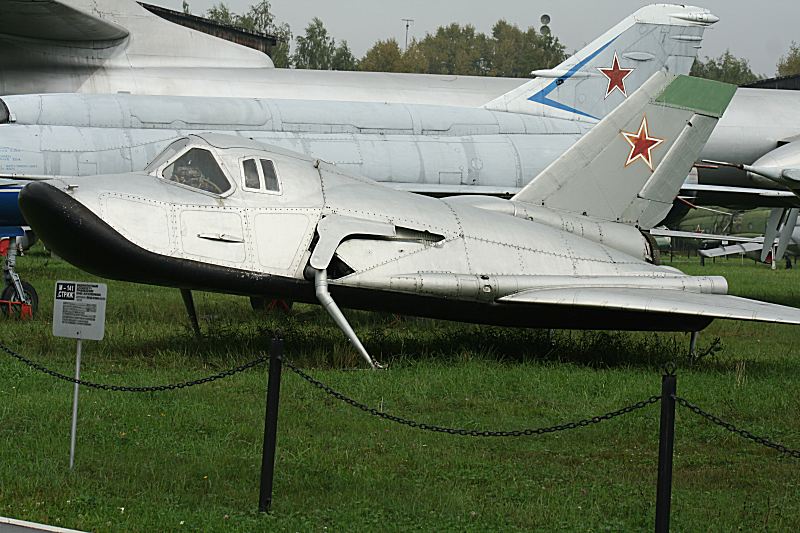 I did a complete walkround photoshoot of the  MiG 105-11 low-speed EPOS testbed. 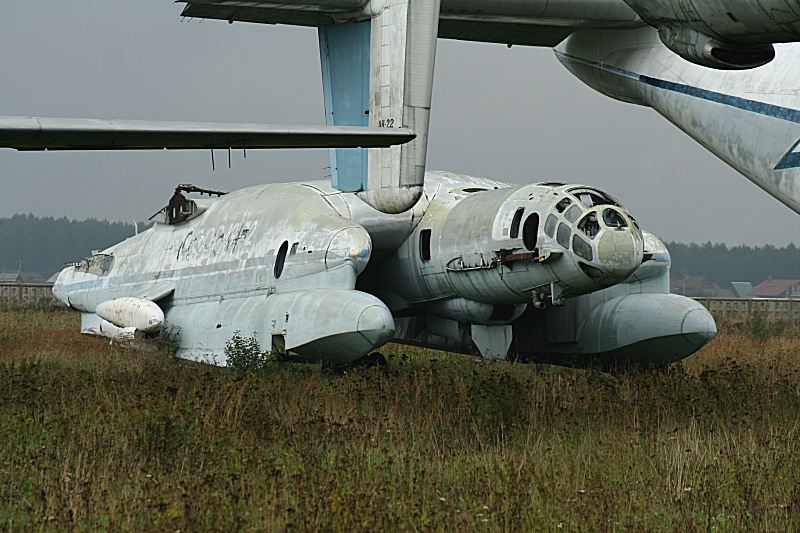 Still there at the rear is the Bartini 14M1P - minus its wings and booster engines. 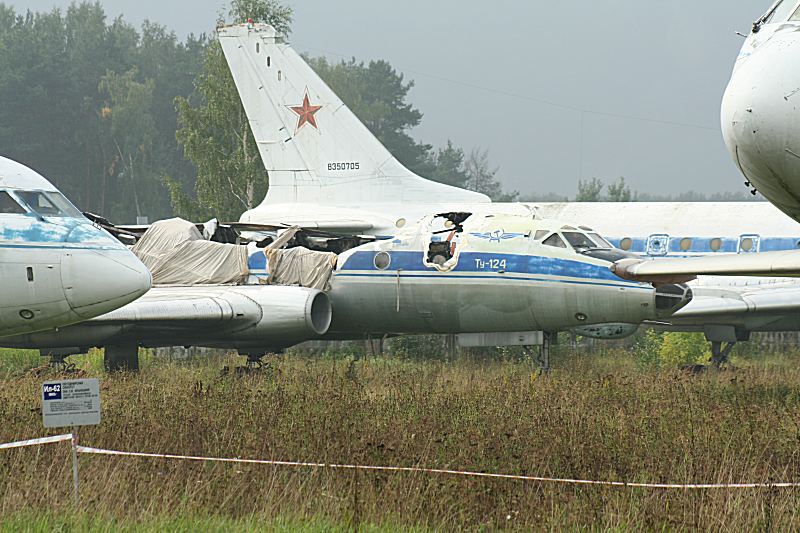 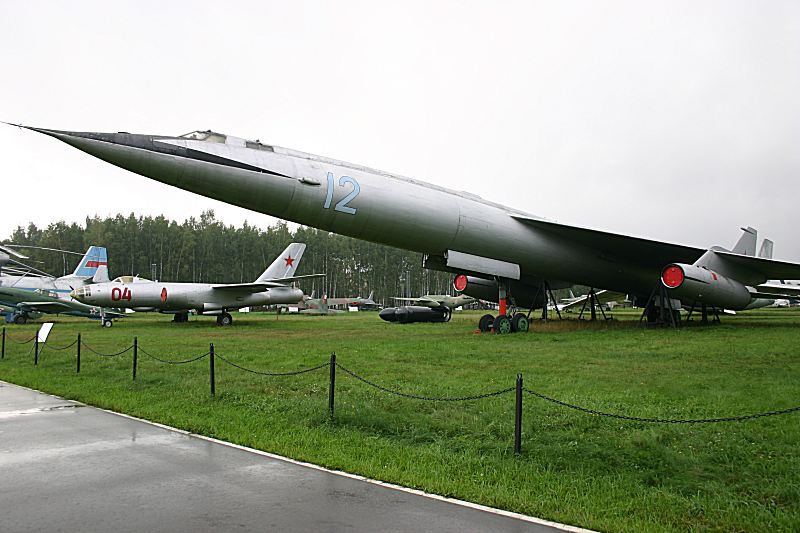 Myasischev M-50 'Bounder' - the subject  of a new Amodel kit! 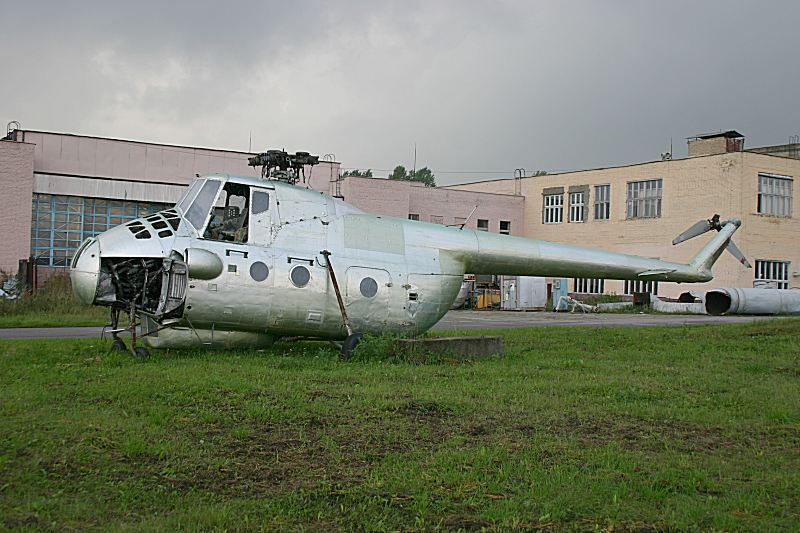 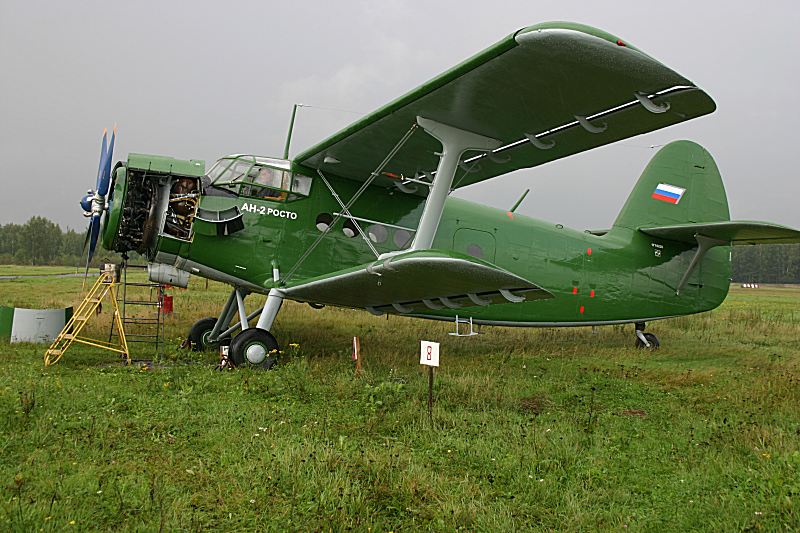 This An-2 belonging to the sports/parachute organisation - ROSTO - was having its engine worked on. 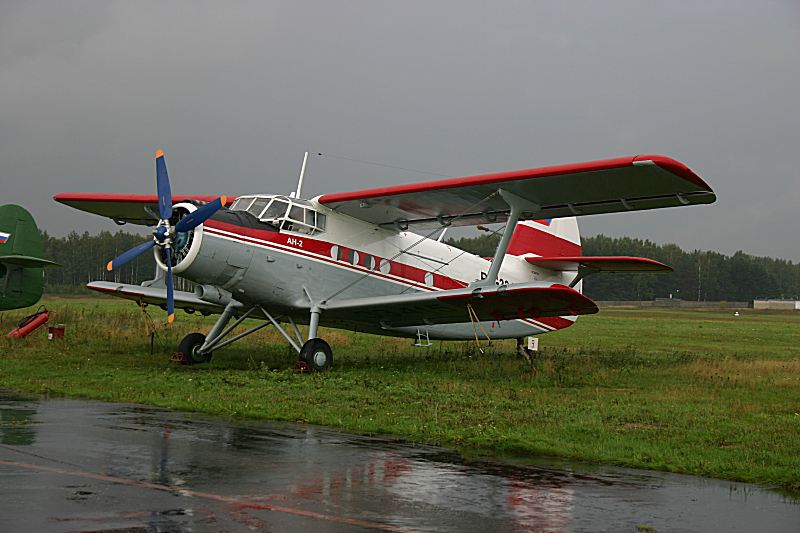 The An-2 looks quite photogenic against a leaden sky - as long as you can keep the rain off your camera. 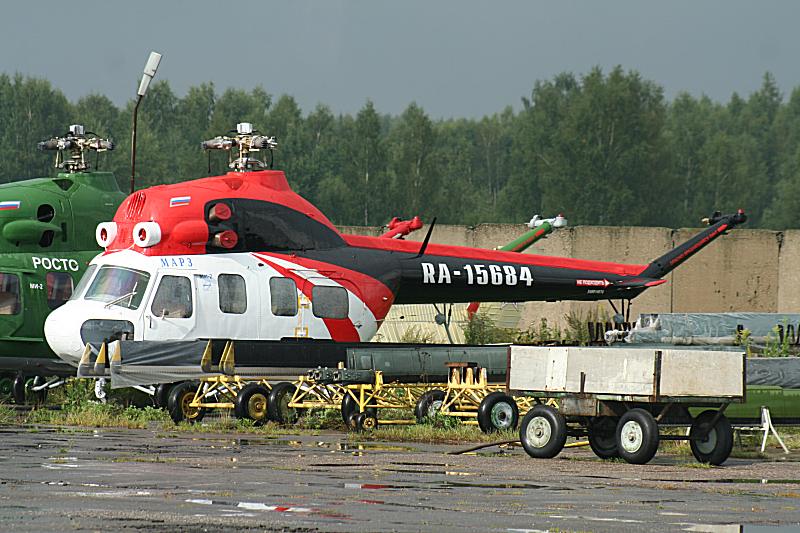