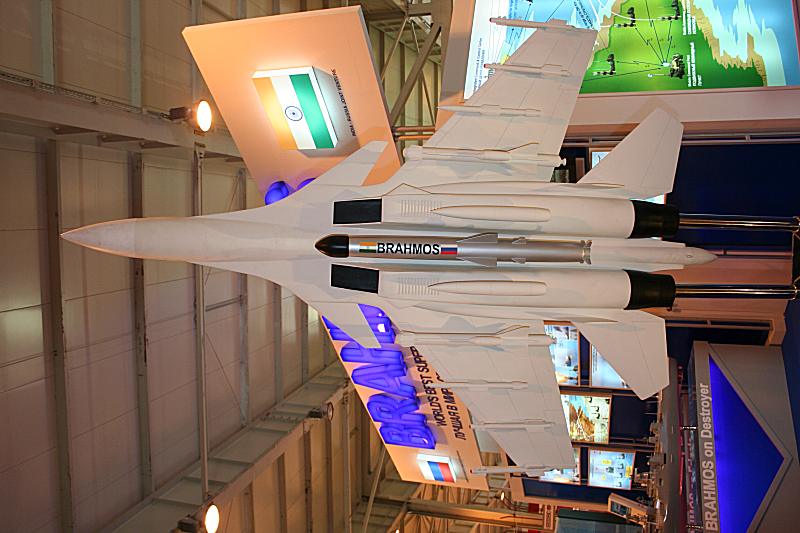 A quick visit to the exhibition halls - where I photographed this model of a Su-30MK carrying a Brahmos missile. 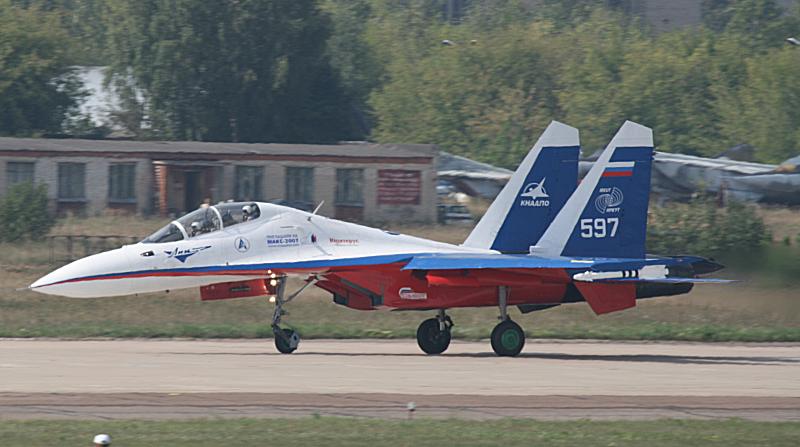 The show started with this Su-30 engine testbed of Salyut/LII, piloted by Anatoly Kvochur. 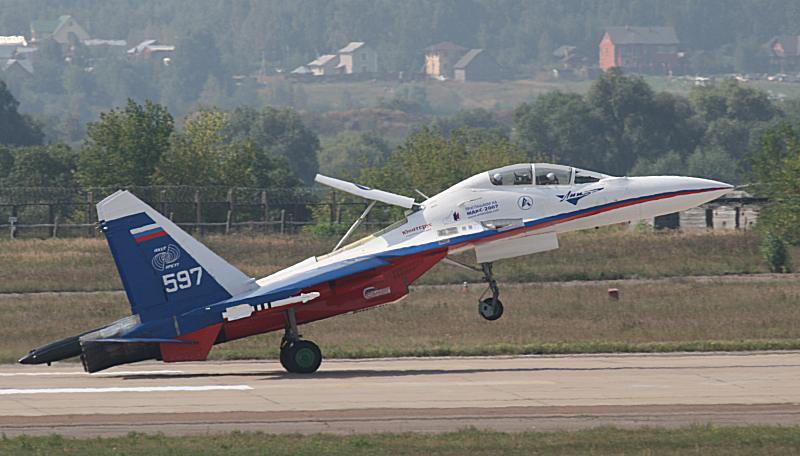 His landing run after the display was immaculate - he kept the nosewheel off the runway until he was just going at walking speed! 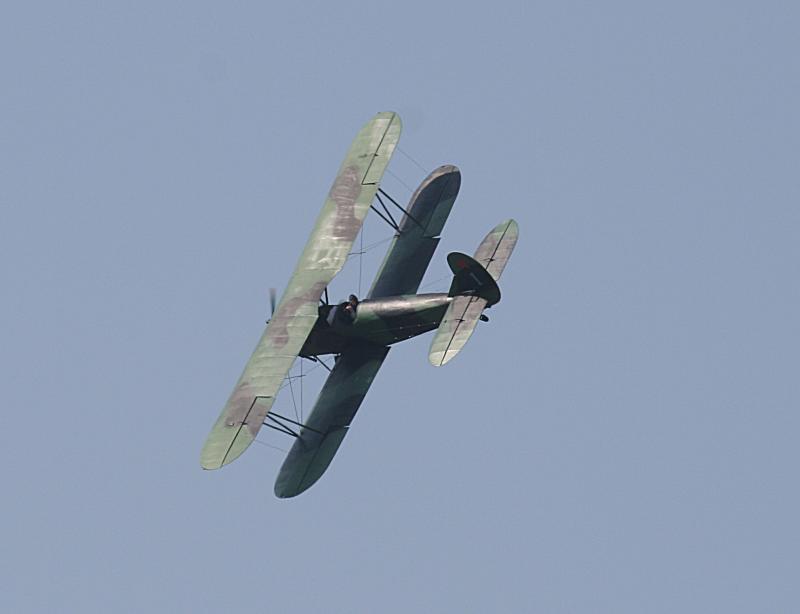 The restored Po-2 put on a nice display - although he was a bit far away. 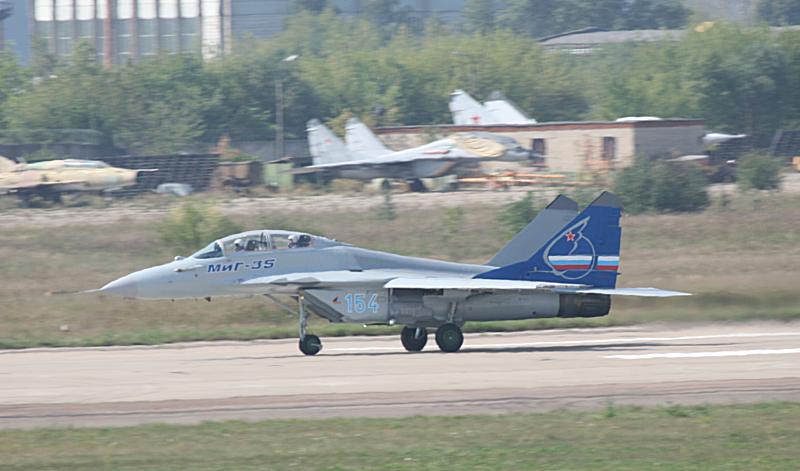 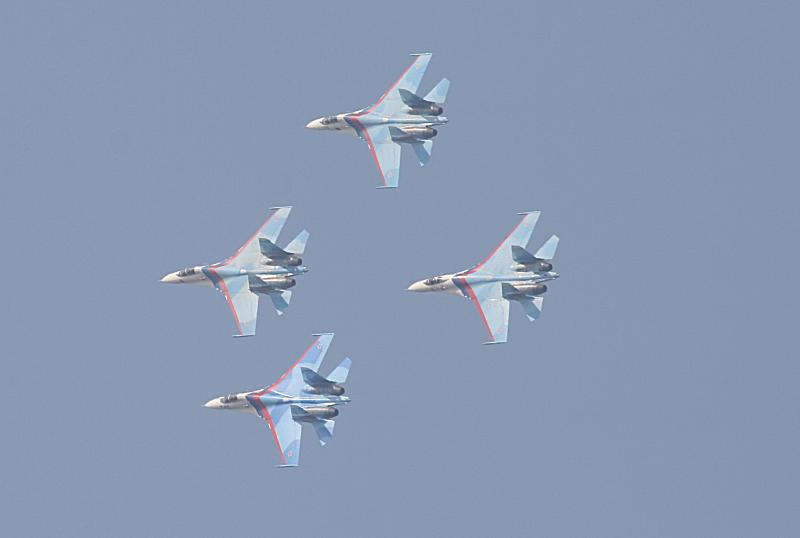 ....and then a four-ship of Su-27's arrived - from the Pilot Training and Conversion Centre at Lipetsk. 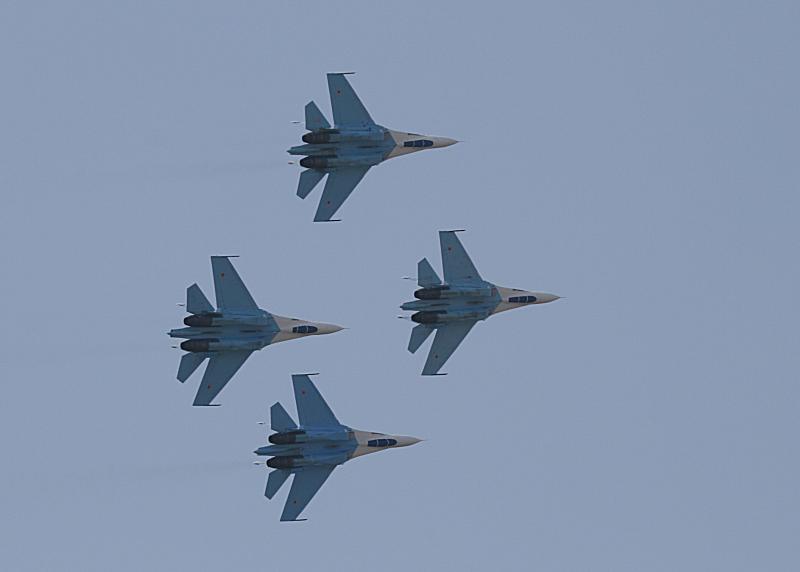 They split into two pairs and staged a mock dogfight - note the painted canopies on the underside of the noses. 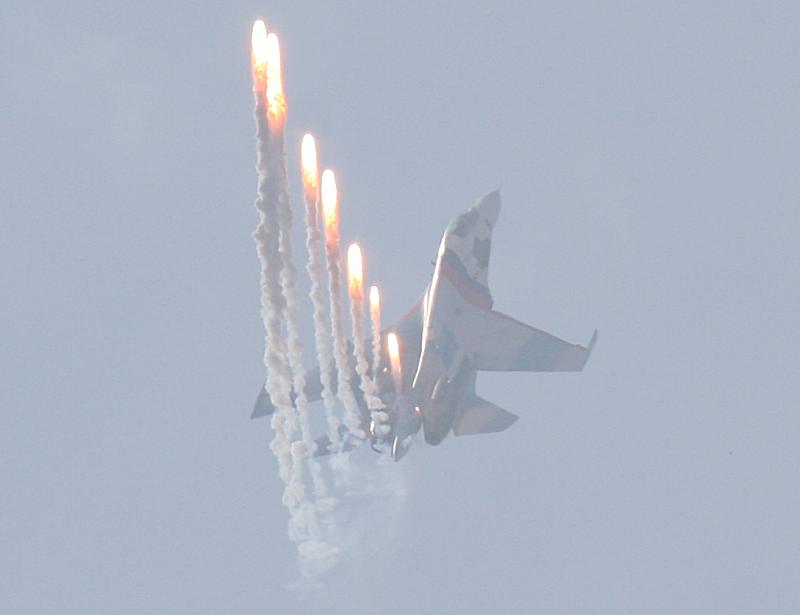 The climax of their routine is a 'forward tailslide' - popping off flares as the aircraft descends..... 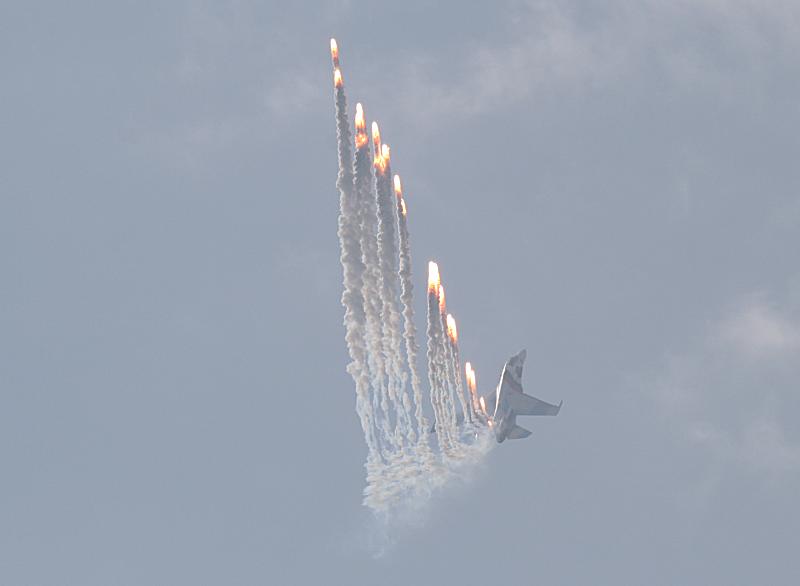 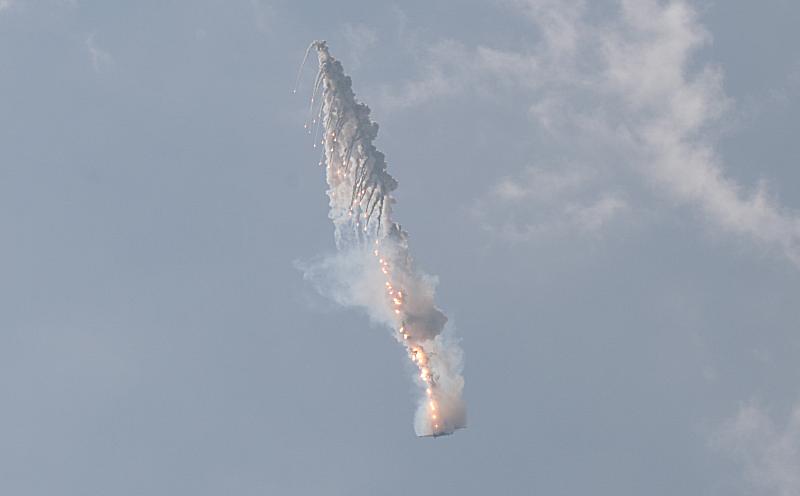 ....until he recovers at the bottom of the slide. 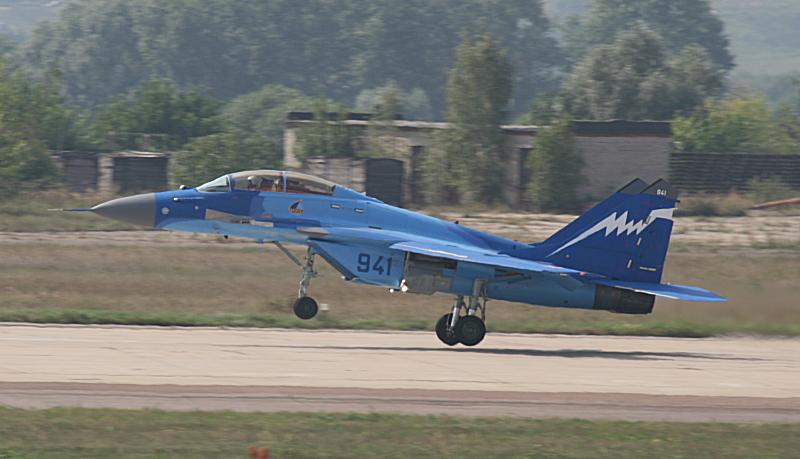 One newcomer at MAKS was the MiG-29K/KUB - destined for the Indian Navy. 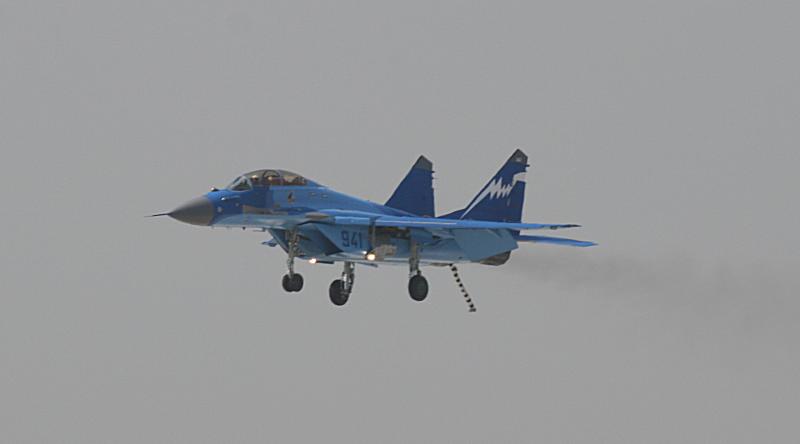 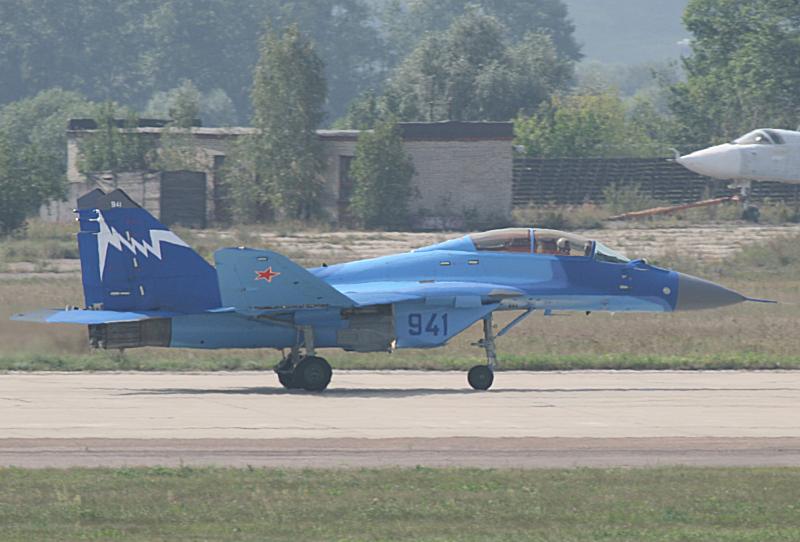 ....and when he landed he did a pirouette on the runway folding his wings at the same time..... 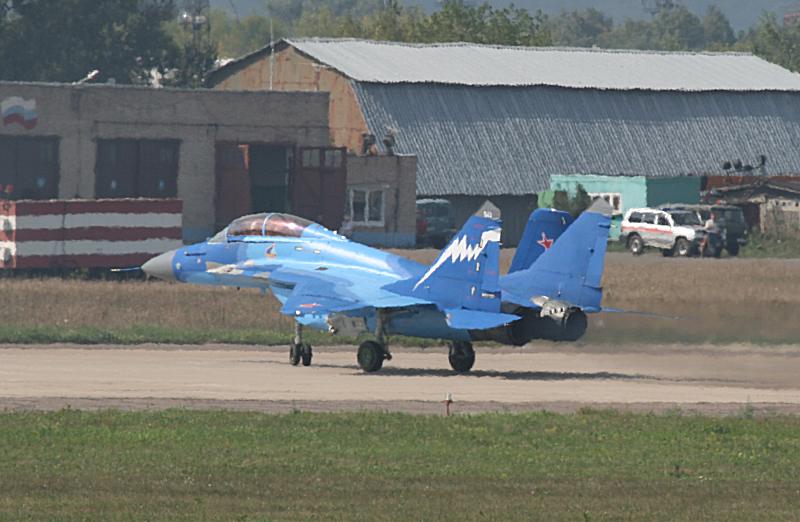 ....except he only folded his starboard wing. I don't know if this was deliberate or some kind of failure with the fold mechanism.

It was an interesting manoeuvre and the crowd loved it - but Victor Pugachev had done the same thing in the Su-33 years before! 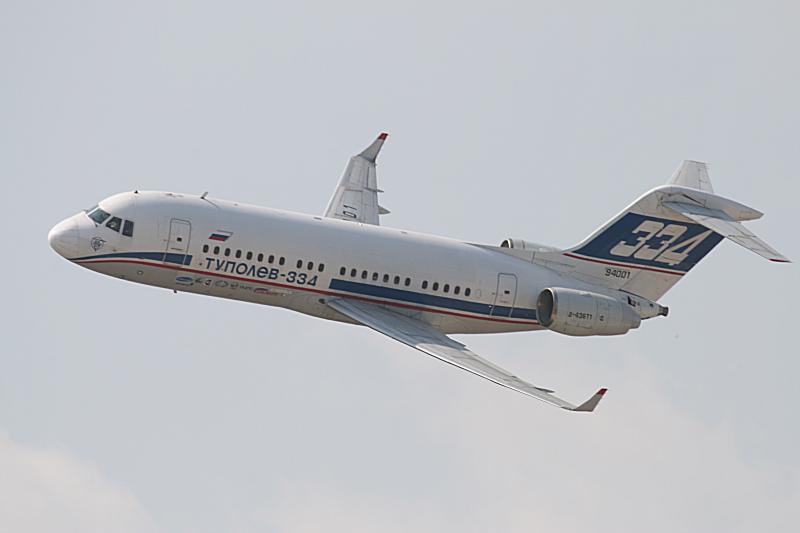 The Tu-334 made yet another flypast - it appears every year but so far has gained no firm order. 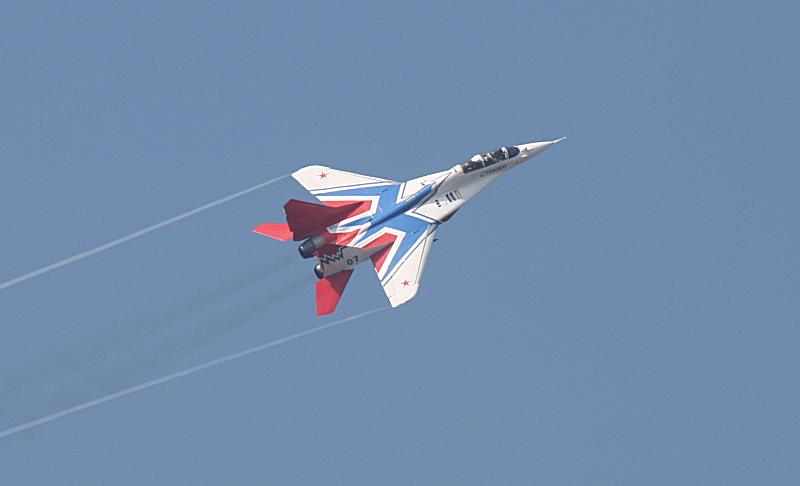 The Strizhi put on their usual polished display..... 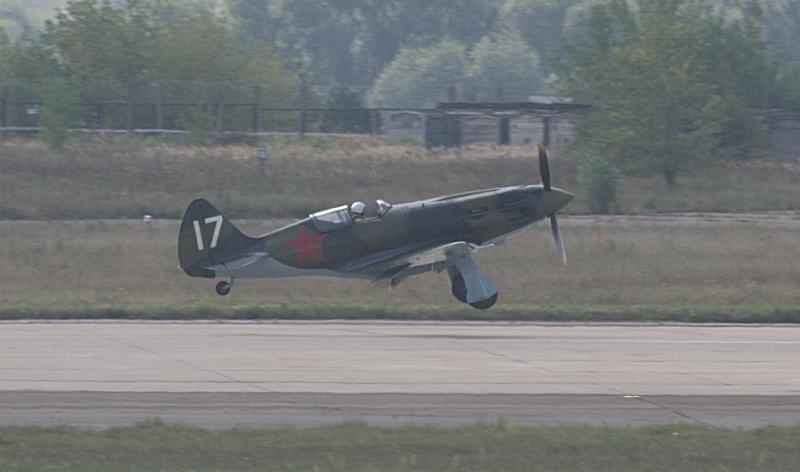 .....but the restored Mig-3 flew too high and too far away to be interesting... 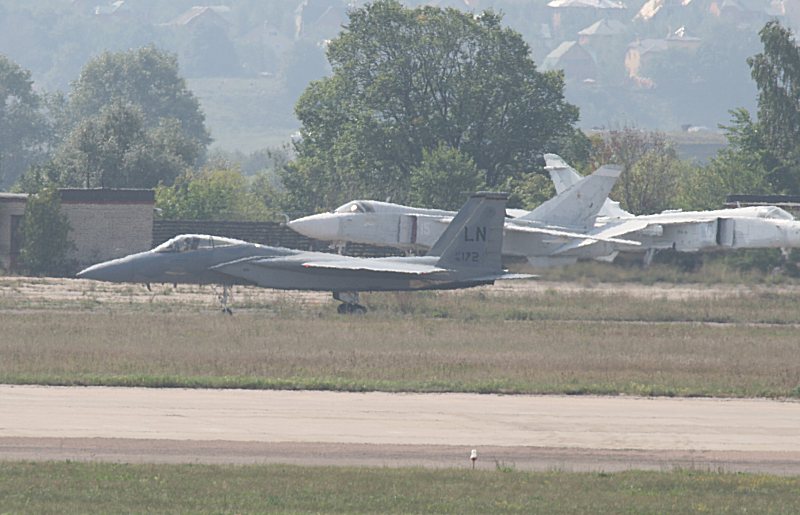 A sight that you would not have thought possible - F-15 taxiing past a row of Fencers!! 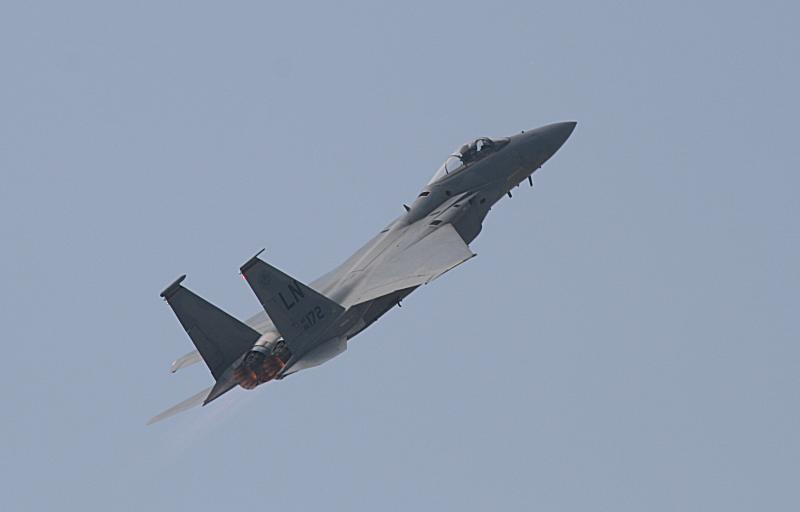 USAF F-15 taking off for his display. 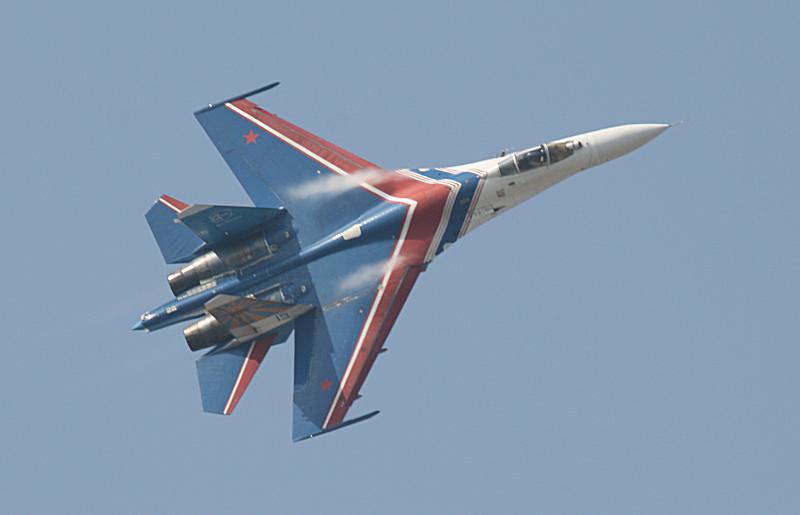 Su-27 of the Russian Knights. 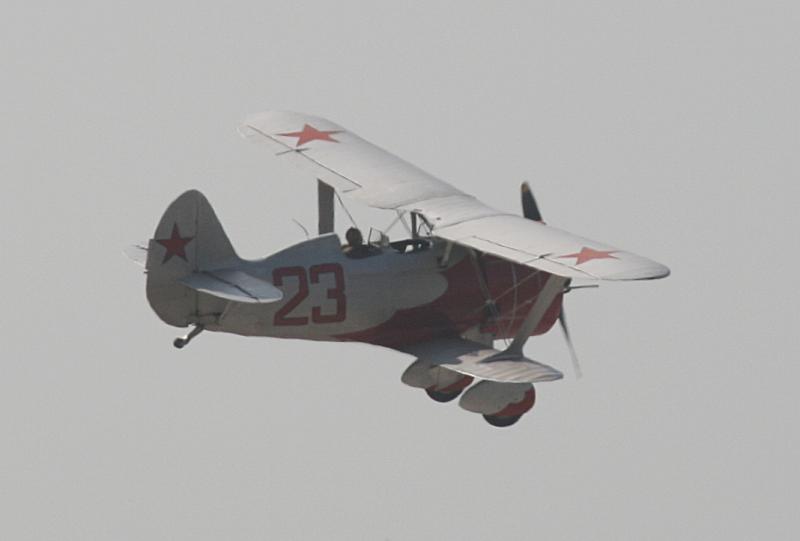 The DIT had obviously been repaired....... 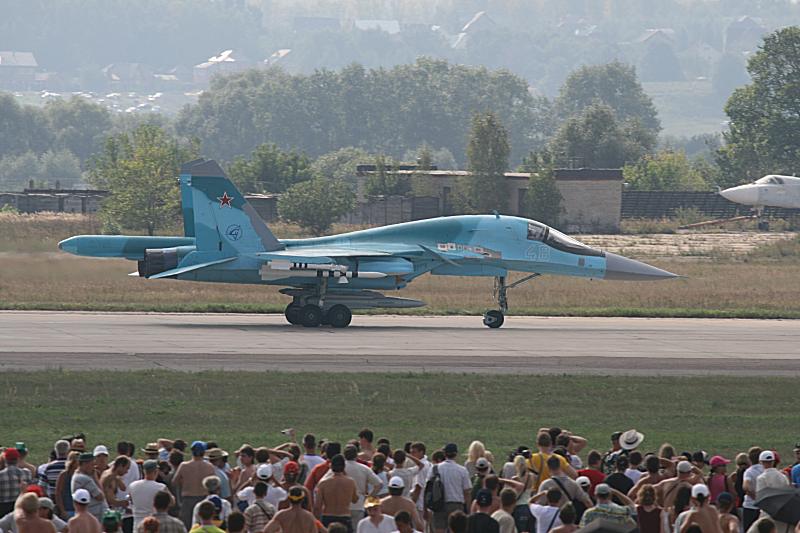 The Su-34 put on a spirited routine for a fighter bomber. 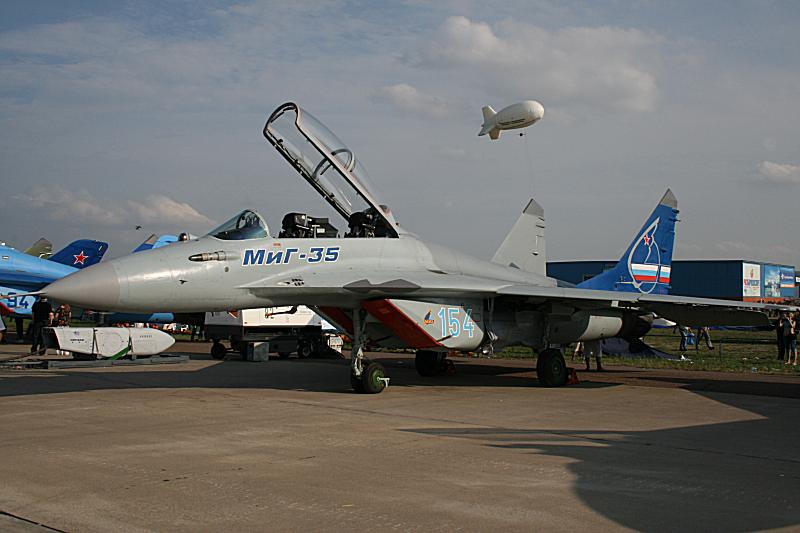 Walking back to the coach.... MiG-35 back in the static lineup. 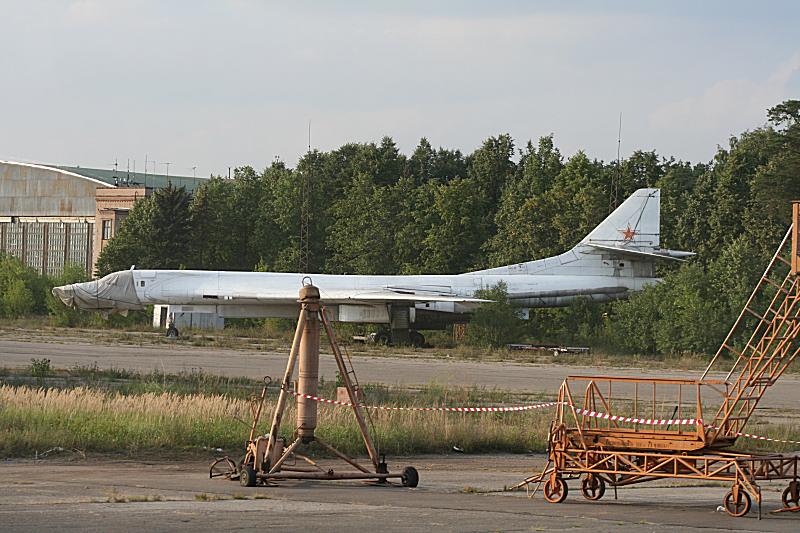 Back on the coach now - going slowly down the 'secret' ramp - photographing through the coach windows. 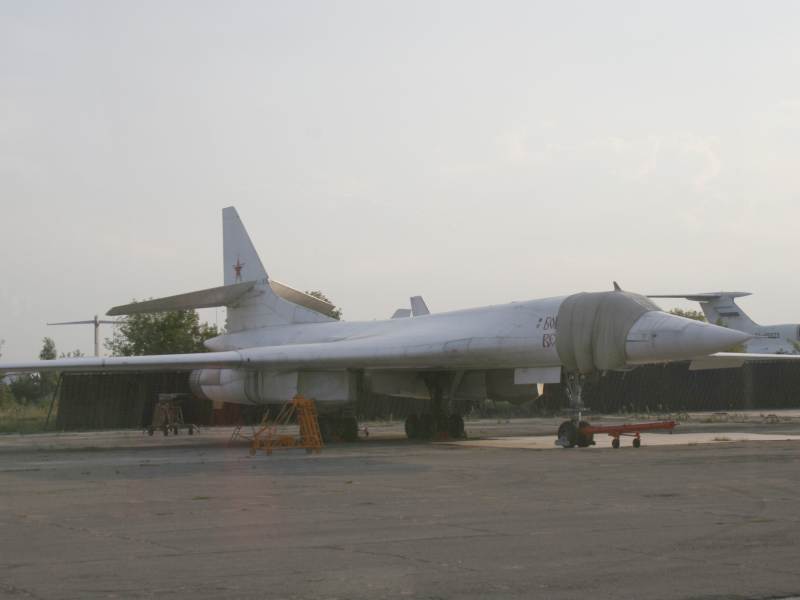 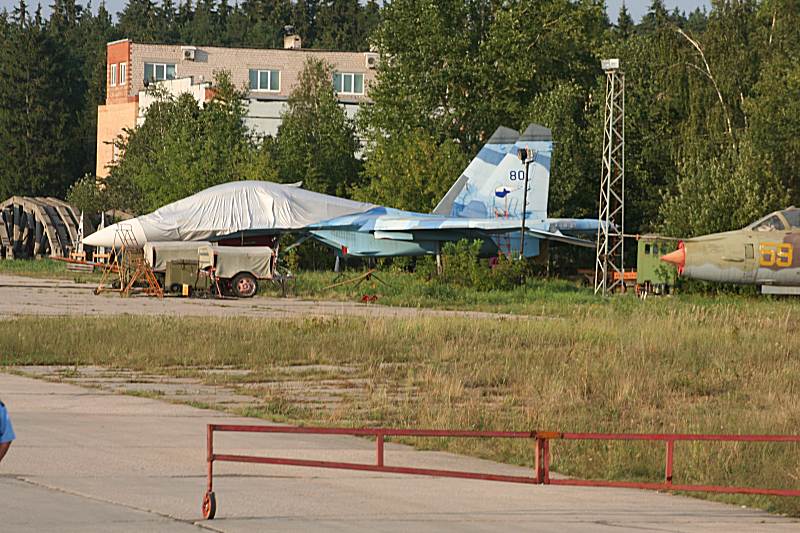 Su-35UB on the Sukhoi ramp. 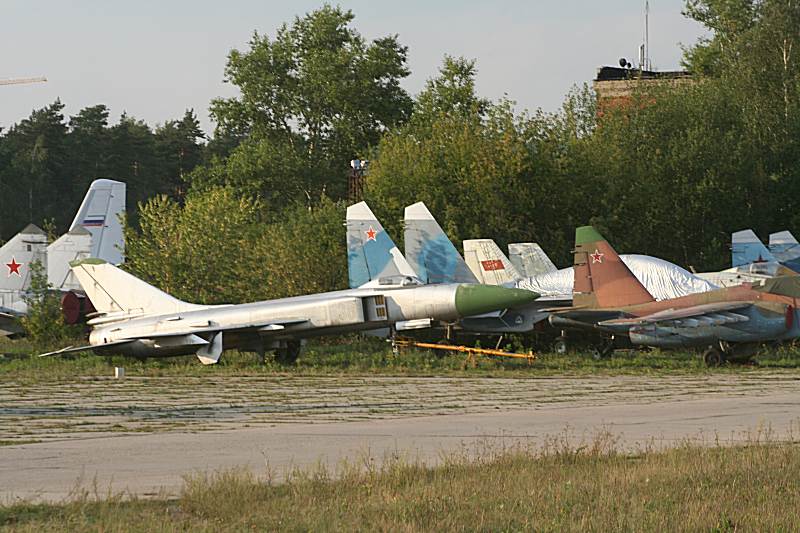 More clutter on the Sukhoi ramp - note the cropped fins of the P-42. 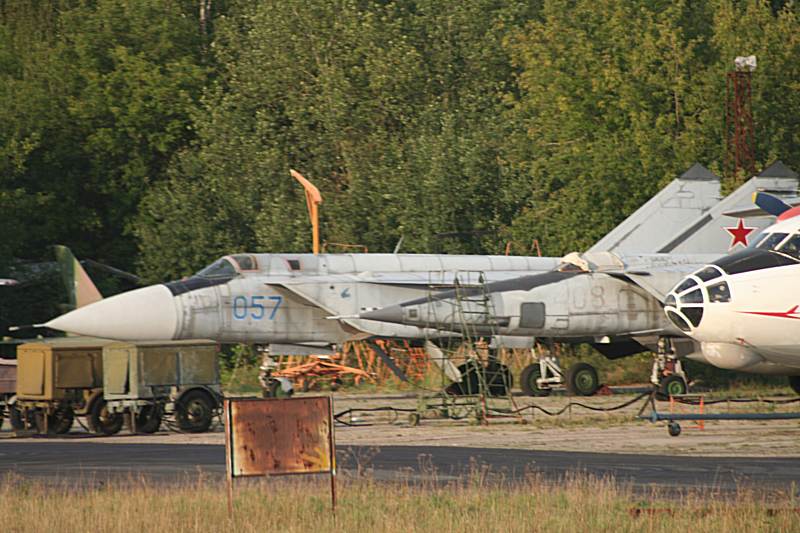 MiG-31M on the Mikoyan ramp. 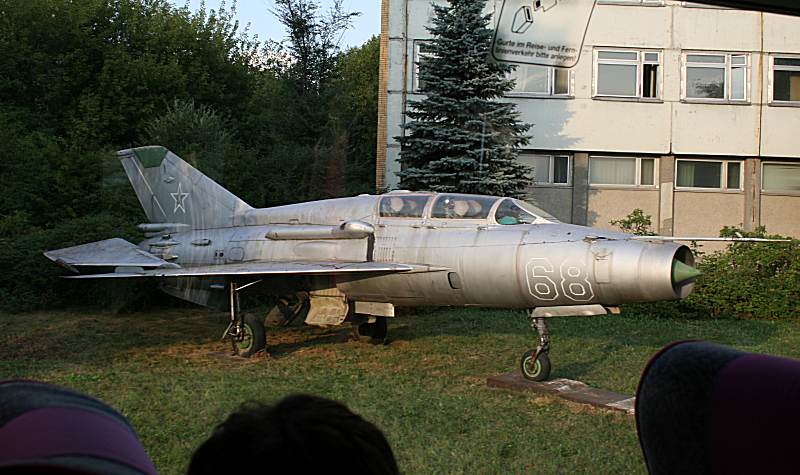