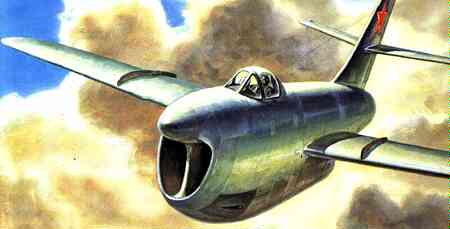 Not to be confused with the later, delta-winged, Su-15 'Flagon', the first Sukhoi Su-15 (given the internal designation of  'P')  was a twin-engined swept-wing interceptor that made its maiden flight on 11 January 1949. In designing the fighter, the design team adopted an unusual vertically staggered engine arrangement with the upper RD-45 turbojet mounted conventionally in the rear fuselage and exhausting at the tail. whilst the lower engine was mounted further forward and exhausted under the centre fuselage. Both engines were fed by a nose intake with bifurcated trunking and the cockpit was offset to the left to accomodate the duct to the rear engine. The fighter was to have had a speed of 652 mph at sea level and 621 mph at 16,404ft. A radome housing the Tory radar was mounted above the nose intake and armament comprised twin NS-37 - 37mm cannon in the lower nose. On its 39th fligh on 3 June 1949 severe flutter developed and the pilot, Sergei Anokhin had to bail out. A second prototype incorporating the lessons learned, was under construction but was never finished.

Unicraft's Su-15 comes in a stout cardboard box with dramatic artwork showing the aircraft 'bursting' out of the background at you. 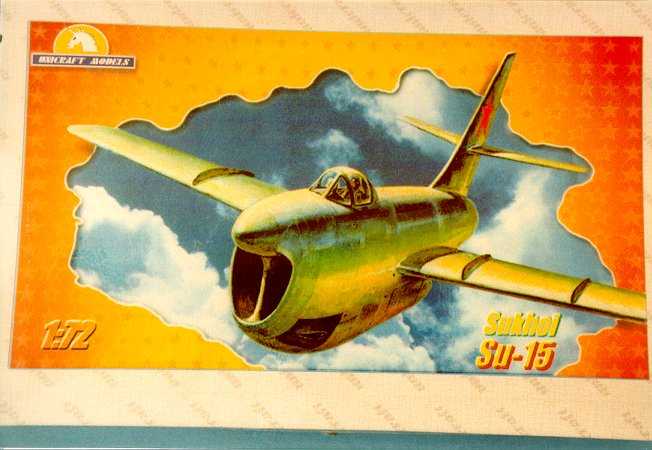 Moulded in grey resin that is very brittle, it comprises some 30 parts with engraved panel detail.  There is some flash and the smaller parts have a thin web of resin surrounding them. The instruction sheet includes a warning about the brittle nature of the resin and advises the use of care and a hot knife. I can vouch for the need to take care - I snapped the corner off the cockpit bulkhead whilst trying to remove it from its pouring plinth. Just take things easy and you will be fine ! 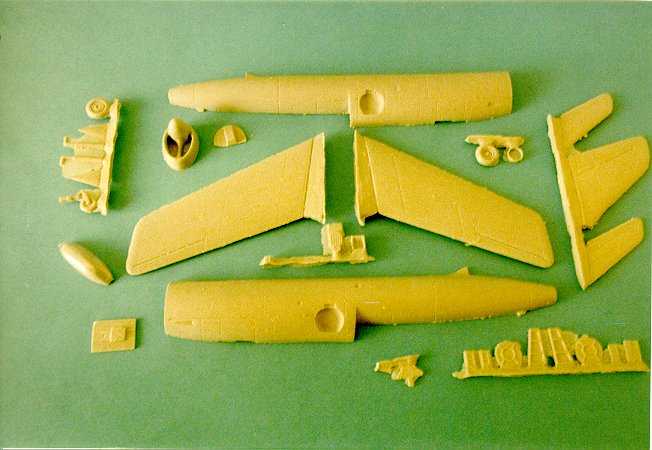 Cockpit detail comprises a floor, rear bulkhead, two-part seat, CONTROL COLUMN ??? and an instrument panel with engraved detail. Side consoles are moulded into the fuselage halves and I added some side panels from thin plastic card - just to cover the rather rough interior. The outside surface of the kit is smooth with very little sign of air bubbles, but the interior looks like an Aero chocolate bar - hence the need for the card panels. The whole cockpit was painted medium grey and the instruments were picked out in black. I also added a couple of instrument decals from a Reheat sheet. The seat was painted silver with a black cushion and headrest.  I added plastic card pieces behind and in front of the cockpit to blank it off. I also added a splitter plate from the cockpit to the intake to divide the intake into two halves. 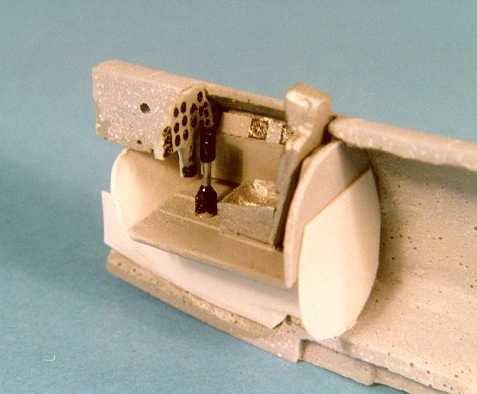 With the cockpit assembly in place and the mating faces cleaned up, the two fuselage halves were joined using superglue.
I would advise the insertion of some lead weight in the nose before the fuselage halves are joined, I neglected to do this and had to stuff some weight through the nose opening of the finished model !

The nose ring was rubbed down to provide a flat surface to mate with the fuselage front and was glued into place. The fit is extremely good, with only a hint of filler being needed to hide the join. The fin is a separate part and needed some filler to blend it into the spine.

The wings were tackled next - after CAREFULLY removing the moulding plinth, they were simply butt-joined to the fuselage, but with the addition of a brass rod spar for additional strength. The same arrangement was used on the horizontal tailplanes - small brass rod spars for strength drilled through the fin.

There are two pen-nib fairings to be added to the underside jet exhaust plus the exhaust nozzles itself.

At this point of the construction I washed the assembly in warm soapy water and when it had dried, I gave the model a coat of primer from a can of Halfords Grey Plastic Primer.  This showed up a few areas that needed attention - particularly at the joints. Once these were made good I decided to tackle the engraved panel lines.

Unicraft's panel lines are accurate, but IMHO, a bit overdone. They are also a bit 'ragged' and ill-defined in places. Now I don't have the necessary skill - nor patience - to re-scribe them and anyway, my view is that panel lines are invisible when viewed from the scale distance that my model would be viewed, so I took the easy option and simply filled them all in !

I did take a scriber to the control surfaces to highlight them, but all the other lines were filled with Squadron 'White Stuff' and the whole model rubbed down. The cannon troughs were drilled out to enhance them. 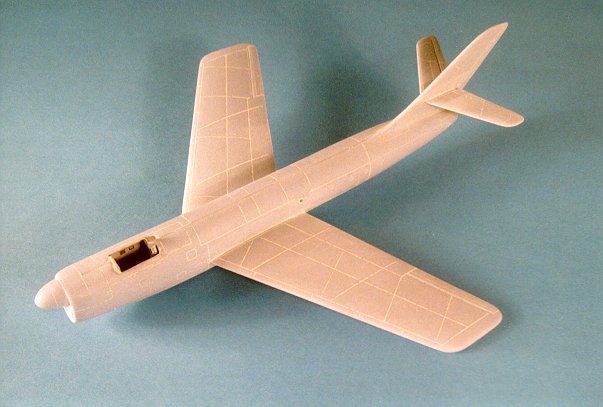 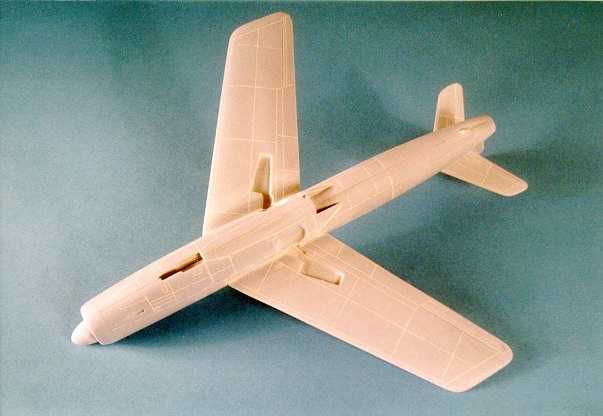 One glaring omission on the kit is the complete lack of wing fences. The Su-15 has two of them on each wing, so these were added from thin plastic card let into grooves cut into the wings at the appropriate position using Unicraft's drawings as a guide. Once superglued in place, they were sanded down to shape. 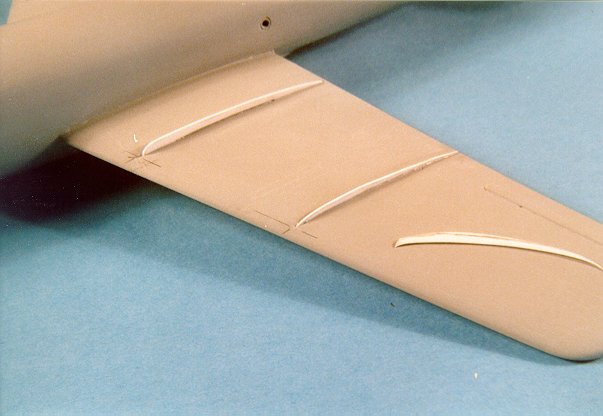 With the model ready for painting, I added some jetpipes from brass tube, the mainwheel legs, suitable cleaned up plus the undercarriage doors. The whole model was given a coat of silver from a can of Halford's acrylic car sprays - in this case Aluminium which gives a nice smooth silver finish. I masked off a couple of areas and sprayed Halford's Nissan Silver for a bit of contrast and added a panel of dark silver around the cannon ports and jetpipes.

The nosewheel was cleaned up and the leg painted silver with a green wheel hub and Humbrol Panzer Grey tires. The mainwheels were similarly painted and added to their legs. The only addition was a couple of mainwheel actuating rams that are shown on the drawings.

The markings on the sole prototype Su-15 could not be simpler - just Soviet Red Stars on either side of the fin. These are not supplied and were taken from the spares box. 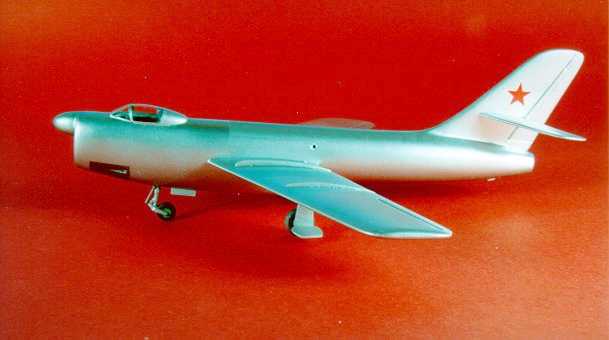 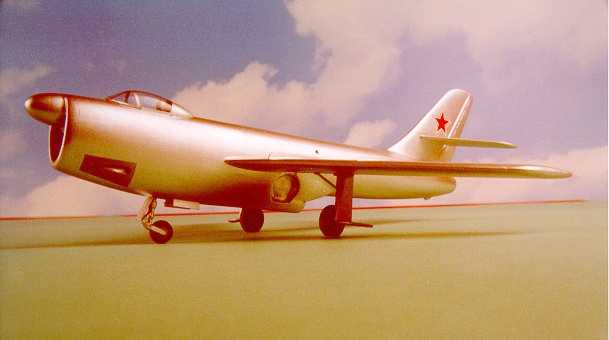 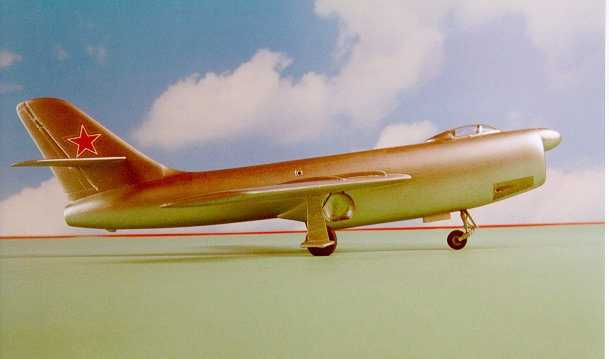 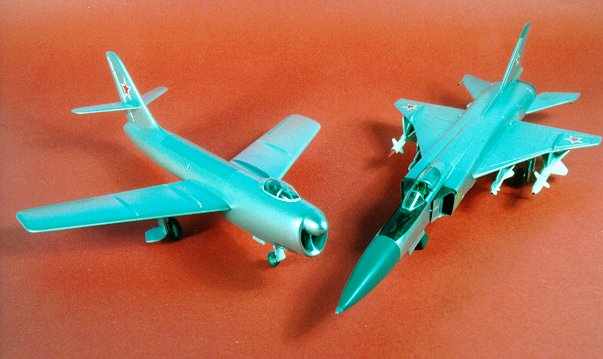 This is a great limited-run kit of a little-known Soviet aircraft. It fits in well with my collection of Soviet aircraft - particularly those from the design bureau founded by Pavel Osipovich Sukhoi.

It was a pleasure to build with few problems and will certainly encourage me to seek out more kits from this source.