Having engineered the cancellation of the Mach 3 capable Sukhoi T-4 ‘Sotka’ in 1967, Andrei Tupolev's OKB presented the Tu-22M as the only contender for the strategic supersonic bomber role.

As a ruse to get MAP funding for this project the OKB disguised it as an upgraded Tu-22 Blinder, but in fact it was a completely new design, known in-house as ‘Izdeliya 45-01’ or ‘Samolyet 145’

With their own development of the T-4 (the T-4M) also cancelled, the design bureau named after Pavel Sukhoi was looking for orders for its products to keep it in the bomber business.

The T-10 Flanker fighter was already in the design phase, so the design team – led by Mikhail Simonov – took a leaf out of Marcel Dassault’s book and simply scaled up the T-10 Flanker layout by a factor of 150%.

As the Dassault Mirage IV bomber was a bigger version of the Mirage III fighter, the resulting Sukhoi T-12 retained the basic Flanker shape, but incorporated a four-place cockpit and was powered four of the then new AL-31F engines supplied by the Lyulka engine OKB.

Capable of Mach 2.2 at altitude and with an unrefueled range of 7,000km, the T-12 was able to carry two Kh-22 (AS-4 Kitchen) missiles on underwing pylons plus another semi-recessed in the central weapons bay between the engine nacelles.

Rolled out of the Sukhoi flight-test facility at Zhukovsky on 12 January 1970, the T-12 underwent systems and engine tests during the spring of that year.

Although slated for mid-March, the first flight actually took place on 1st April 1970 at the hands of Sukhoi Test Pilot Vladimir Ilyushin, twice Hero of the Soviet Union.

Accompanying him on that first 1.5 hour sortie was flight engineer Pavel Krotkov, and lead navigator Sergei Popov. The rear WSO's seat was unoccupied on that first flight.

Following the highly successful first flight, the T-12 made ten more test flights from Zhukovsky and went supersonic on the eighth – on 23 June 1970.

The design max speed of Mach 2.2 was achieved on the ninth flight – 1 July 1970, following which, at the instigation of Andrei Tupolev, the whole programme was cancelled on the orders of Leonid Brezhnev.

With their hands full getting the T-10 Flanker into production, the design team had no choice but to accede – but to this day, Mikhail Simonov insists that the Sukhoi T-12 was a better all-round supersonic bomber than its rival Tu-22M3.

Recently released photos of the Sukhoi T-12 show its similarity to the T-10 Flanker, albeit much bigger........ 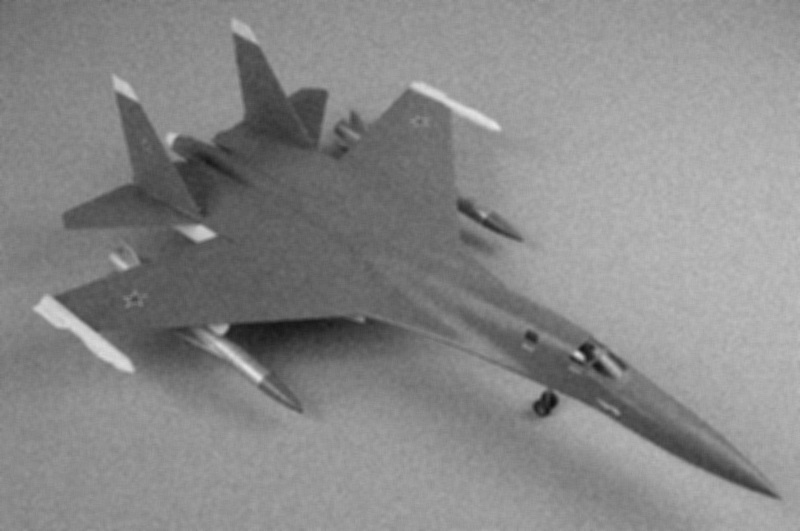 The first image ever taken of the Sukhoi T-12 - by US DoD satellite. 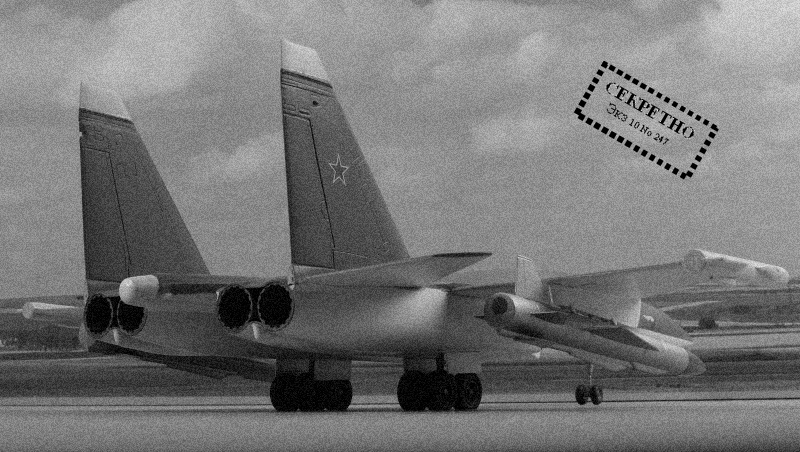 Poor quality image - but it does show the nozzles of the four AL-31F turbofans.

T-12 on the ramp at Zhukovsky - the wingtip RZM-74 ESM pods are clearly visible. 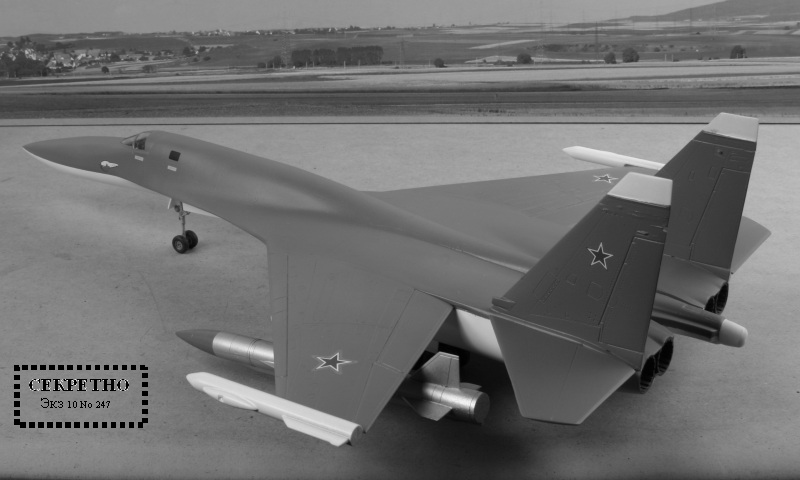 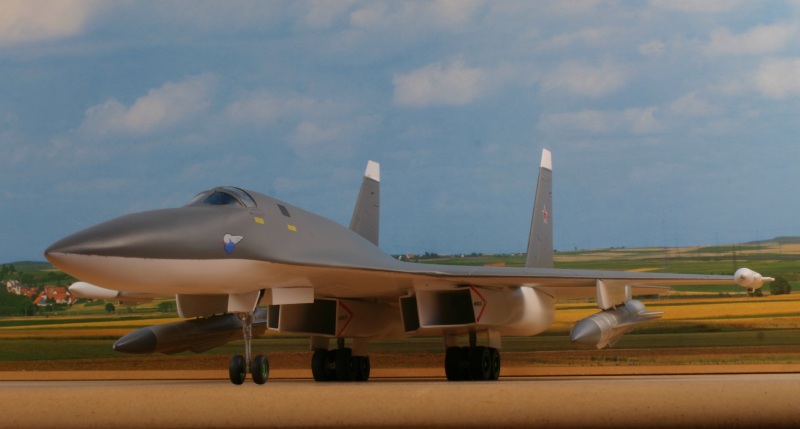 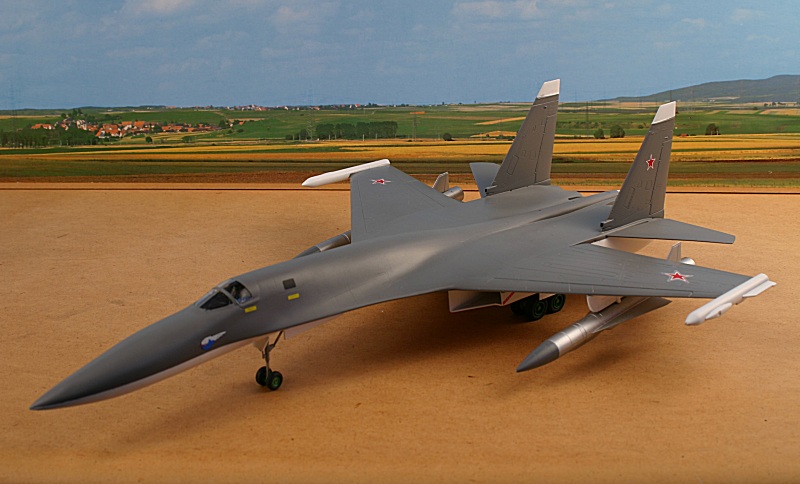 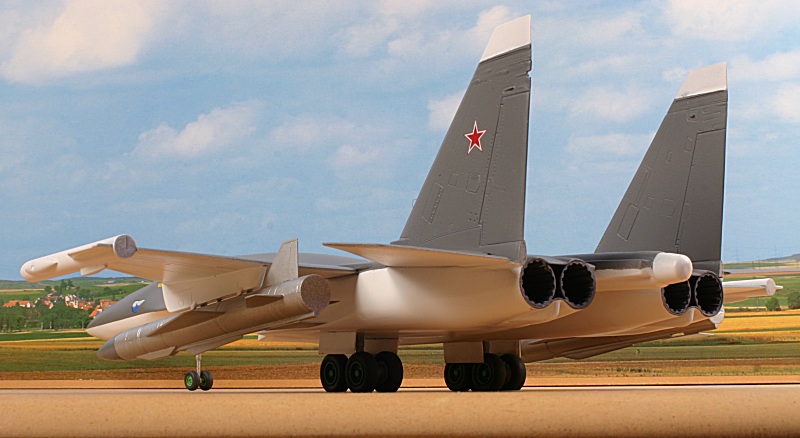 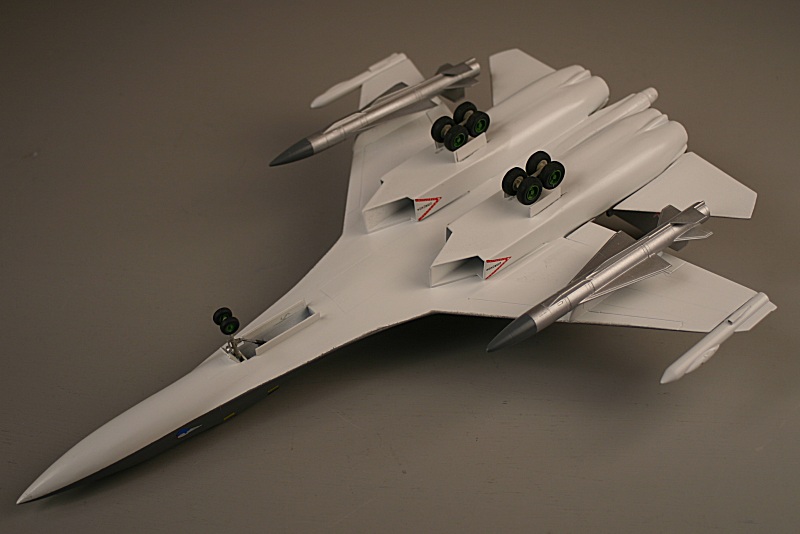