Box art and components for the Mi-8T 'Hip-C' - the Mi-8MT/Mi-17 kit is exactly the same - apart from the decal sheet!

The parts are superbly moulded with crisp detail.

The raised detailing on the rotor blades is a bit overdone - and there is no moulded-in droop.

The fuel tanks are separate parts - which makes conversion to other variants easier.....

The glazing is thin and very clear - the decal sheet well printed and in register.

For my Mi-8T version I am displaying the rear clamshell doors open. Hobby Boss have moulded a deep groove on the inside of

the fuselage - so cutting off the doors is easy. I will use the Pavla engine decking on this model.... 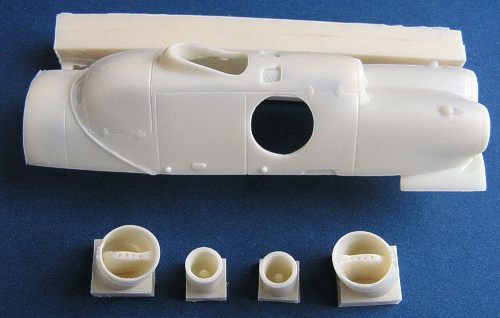 The interior detail is very comprehensive - this is my Mi-8MT with green instrument panels - early Hips had black panels.

The seats are from the KP/Italeri/Revell Mi-8 kit - Hobby Boss do not supply troop seats. Pavla provide a set of troop seats...... 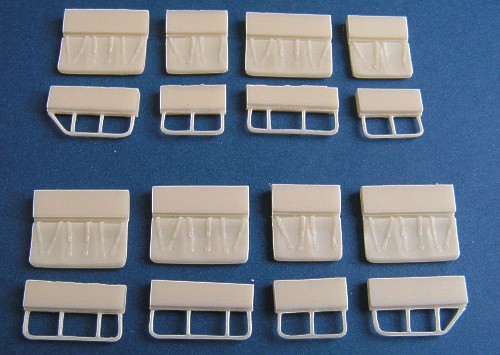 Crew position - note that seat harnesses are not supplied.

The prominent First Aid boxes are painted white and a red cross decal applied - not provided for by Hobby Boss.

For my Mi-8T variant, I painted different coloured cushions and black instrument panels.

In both versions the instrument binnacles are black.

The fully-detailed interior, with floor, roof and overhead panel. This panel should have instruments on it - again not supplied by HB.

The interior parts fitted into the starboard fuselage half.....

The detail is very good for this scale.

The kit tailplanes lack any detail - easily scribed on - or purchase the Pavla set.........

I have cut out the emergency hatch in the starboard clamshell door - I will mount a machine gun later.

On the version I am making, the main undercarriage legs have a 'web' in between - added using plastic card (or buy the Pavla set).

I am fitting a nose-mounted machine gun - so I made the canvas cover from a plastic knitting needle - and made a hole on the glazing.

The raised detail on the blades is too prominent - so I have rubbed them down.....

This is the Pavla resin conversion set - with the correct engine decking for the Mi-8T variant.

The 'correction' just needs the removal of the Hobby Boss Mi-8MT engine decking....

.....and once the fuselage is assembled..... and a few parts added to the resin decking...

...it is simply popped into place. It needs a bit of filler to blend it all in.

I decided to shorten the fuel tanks on the Mi-8T version - HB supply the longer, 4-strap fuel tank. I simply sawed through

I had to shave off the moulded-on raised plinth from the fuselage to the rear of the shortened fuel tank...

The starboard tank got similar treatment....

Mi-8MTV at top, early Mi-8T at bottom showing the shortened fuel tanks and Pavla resin engine deck on the latter.

Seat belts and kevlar armour fitted inside the cockpit.

Hobby Boss have cleverly made the tail rotor final gearbox so that it can be fitted either way.

The Mi-8T (left photo) is on the starboard side, the Mi-8MTV is on the port side.

Cutting off the clamshell doors to make the ramp....

The rear end of clamshell door is bent outwards to widen it.

Corresponding cutouts in the floor section.

Making the ramp opening - I added a plastic card 'bridge' across to top of the opening......

....then another piece of plastic card - with lightening holes drilled in it - across the 'roof'......

...and finally slivers of plastic card to fill in the gaps. I will add filler to smooth everything out.

I have cut out the aperture for the front lower window on the right.

After carefully painting the cockpit light blue-grey, I found a photo showing that the Russian AF Mi-8MTV-5 has a black cockpit!!.

After re-painting, I added a length of black vinyl tape between the two instrument binaccles - to represent the cover seen on the real thing.

I also discovered that my starboard door opening was to far back - so it has been moved forward!

Much sanding, filling, sanding - until I was satisfied that I had got the shape more-or-less right.....

Looking down on the widened rear fuselage showing the wider section.

I am quite pleased with the results.

I have made the lower nose windows from sections cut from an old clear plastic stand.....

....and have carefully cut away the lower nose glazing.

The side door is too wide - so I have 'narrowed' it. I also added sloping bulkheads to the nose and attached

shaped plastic card to act as templates for the Milliput......

Side and plan shaped templates attached..

Rough cut plastic card quadrant shapes are used to fill in the gaps......

I decided to use Squadron White Stuff instead of Milliput....

The heat exchanger section is removed from the front of the starboard fuel tank......

....a new rounded front end is carved from a 9mm plastic knitting needle.....

......and cemented to the front of the starboard tank (bottom).

The port fuel tank has a vertical cutaway at the front to allow the wider door to slide open.

A new heat exchanger is made using an 8mm knitting needle carved to shape - with the kit intake part attached.

The finished heat exchanger - ready to be cemented in place above the new starboard door. I will add an exhaust pipe later.

Starboard side with new door and rails, heater removed from front of fuel tank.

Scratchbuilt ramp for the Mi-8MTV-5 - made from two laminations of plastic card, with ribbing strips.

Closeup of the external winch fitted to later Mi-8's

Another view of the winch.

KP Mi-8T - minus its rotor blades.

The shape of the real thing. 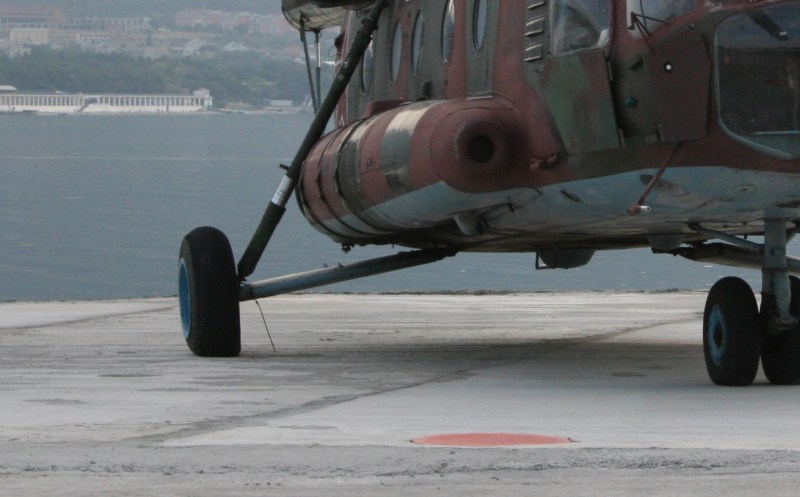 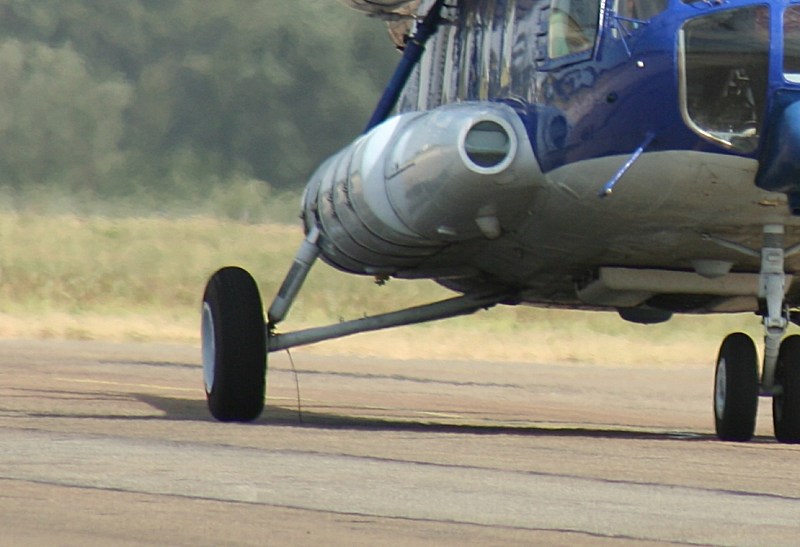 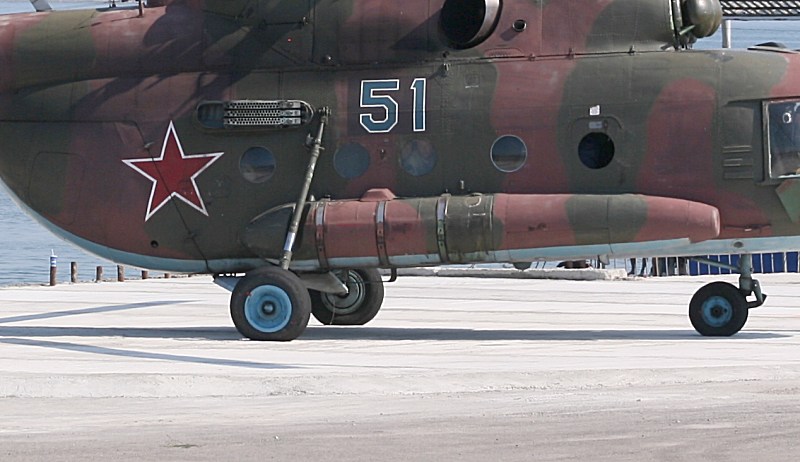 Standard tank from the side..... 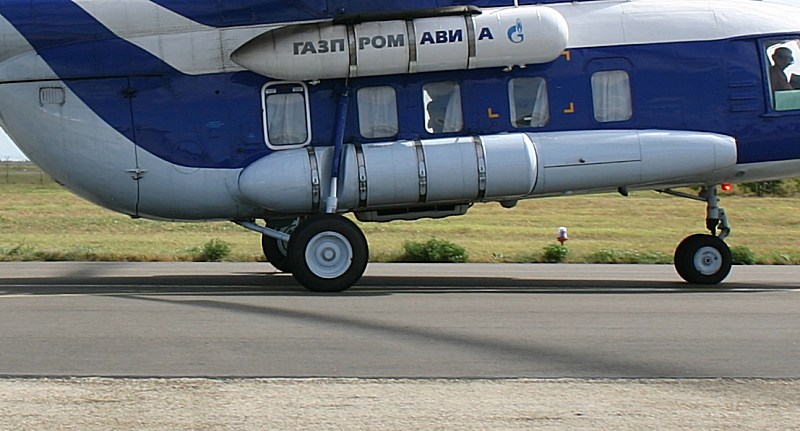 ....bigger tank from the side. 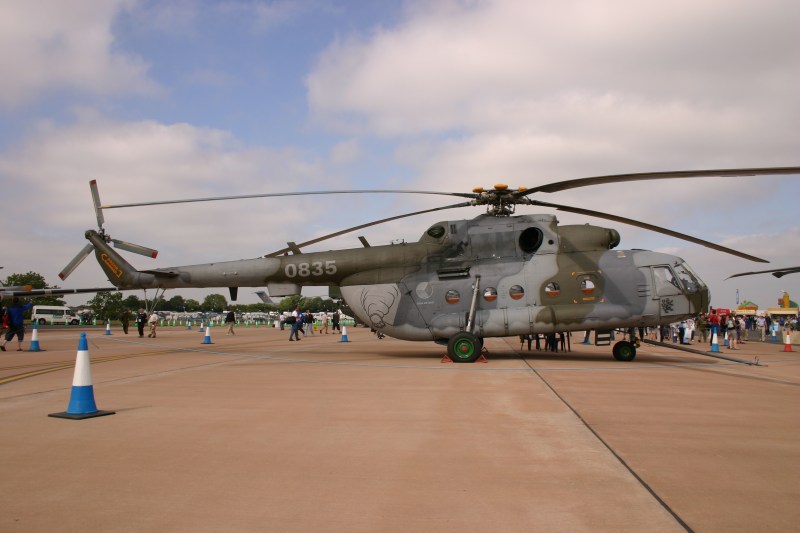 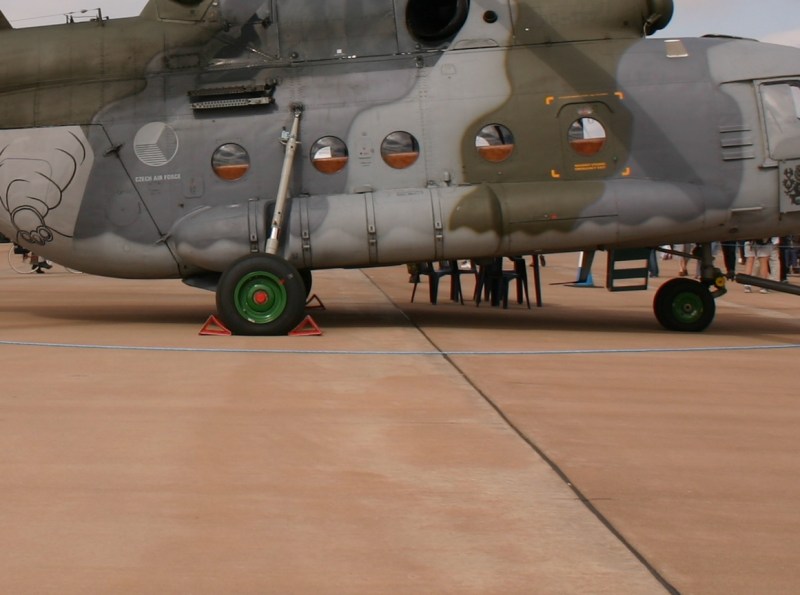