Kay and Ken's cruise down the Rhine.

(from Basel to Amsterdam) 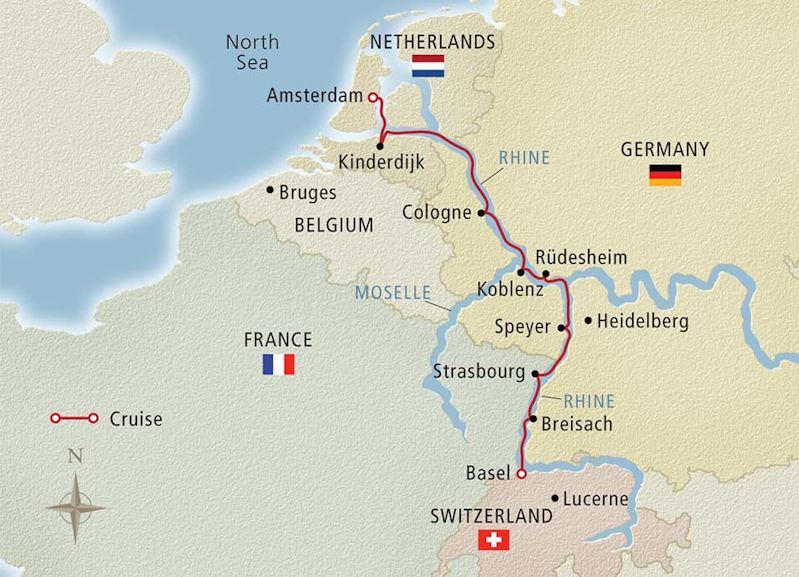 Link to a Ships Portrait of the Viking Idi


After our British Airways flight from Heathrow to Zurich, we were met at the airport and driven to Lucerne where we were to stay for two nights.

We stayed at the Lucerne Raddison Blu - where, after unpacking, it was out to see the sights of the city and take in an evening meal beside the lake.......

We went on an organised early morning walking tour of the city with our Viking Tours guide - see the market and visit the old town.

Later we were 'let loose' - so Kay and I visited the famous 'Dying Lion' and then discovered the 'Boubaki Panorama' - before boarding the 'Saphire' for a cruise around the lake.

Back at the hotel, we were intrigued by the sight of a steam boat on the back of a low loader in the shipyard opposite the hotel - so we marched down and asked the lorry drivers about it.

They spoke perfect English (naturally!) - and told us that they were leaving - under police escort - at 10pm to take the 1909-vintage 'Rudolf' to Austria.

After a stroll into town and an evening meal by the riverside, we walked back to the hotel to watch the Rudolf leave for its long and tortuous journey to Austria.

We were not due to depart to Basel to board our cruise ship until late afternoon - so we booked to go on a tour up mount Stanserhorn.

After an early morning stroll to a park near the hotel, we boarded a coach and were taken to the funicular railway at Stanserhorn - which took us up to the cablecar station for the fascinating ride up to the top of the mountain.

The weather was kind - and we had some stunning views from the top. We even braved the trek from the cablecar terminus up to the summit.

Returning from the trip to Stanserhorn, we boarded our coach for the trip to Basel - where we boarded the Viking Idi and settled in for our departure down the Rhine.

Our first real day of cruising - the Viking Idi arrived at Breisach in the early morning - and at 08:30 am we boarded our coaches for the 'Black Forest Tour'.

Arriving at our destination - a local workshop - where we were invited to watch demonstrations of glass blowing, cuckoo-clock and cake making - and, of course to purchase some of the products on sale.

On the way back, our guide was telling us the legend of a stag - which I managed to snap through the windows of the moving coach - before arriving back at the ship for lunch.

The afternoon was free, so we toured the castle and streets of Breisach and relaxed before returning to the ship prior to departure.

Early morning saw us arriving at Kehl (Germany) / Strasbourg (France) - where we had a city tour booked.

Back on board, Kay was surprised at dinner by the arrival of the waiters - who sang Happy Birthday and presented her with a cake to mark the occasion.

An early morning departure by coach to Heidelberg - where we visited the old castle and spent the remainder of the day photographing (me) or shopping (Kay) around the old town.

Back on board for lunch the Viking Idi set sail for Rudesheim. The evening meal was a special one prepared by Chef Dimitar.

The Idi cast off from Rudesheim for a daytime journey through the scenic 'Middle Rhine' with its profusion of castles perched high on either bank.

Although the weather was cold and overcast, I managed to photograph most of what we passed - before arriving in Koblenz, where we docked at 1pm.

No time to take stock, we were on a coach by 1:30pm for a visit to the old castle of Marksburg.

Returning to Koblenz for a free afternoon, we decided to take the cablecar up to the fortress on the opposite bank. The kind lady in the pay booth told us to wait for cablecar number 17 - as it had a glass bottom - so we did.

Back down to earth, we wandered around the 'German Corner', before boarding the ship for the evening meal - which was themed as 'A taste of Europe'.

Having cast off from Koblenz in the early hours, the Viking Idi arrived at Cologne at 9:00am - ready for our city walking tour at 9:15am - where we visited the famous Cologne Cathedral.

After the organised city tour, we left our guide and wandered around the city on our own - before returning to the ship for a cultural evening of classical music on piano and violin.

We departed Cologne at 11pm.

The last morning of our cruise was spent attending a 'Disembarkation Briefing' - after which it was up on deck to photograph the passing Dutch scenery.

We arrived at Kinderdijk at 4:00pm for our planned shore excursion to see the famous windmills.

The weather was interesting - with massive storm clouds and rain showers on the horizon. We got caught in a huge downpour of stinging sleet - which made a lot of our group head back to the ship.

Those of us who braved the elements (I got soaked) were rewarded by a visit to a small windmill museum and some stunning views of the windmills agains the stormy backdrop.

Departure day - bags packed and accounts settled, we were bussed to Schiphol airport to catch our flight back to Heathrow.

This was a very enoyable cruise with some amenable fellow travellers, we were made very welcome by all the ships crew and we had a great time.