Kay and Ken's cruise up the Elbe. 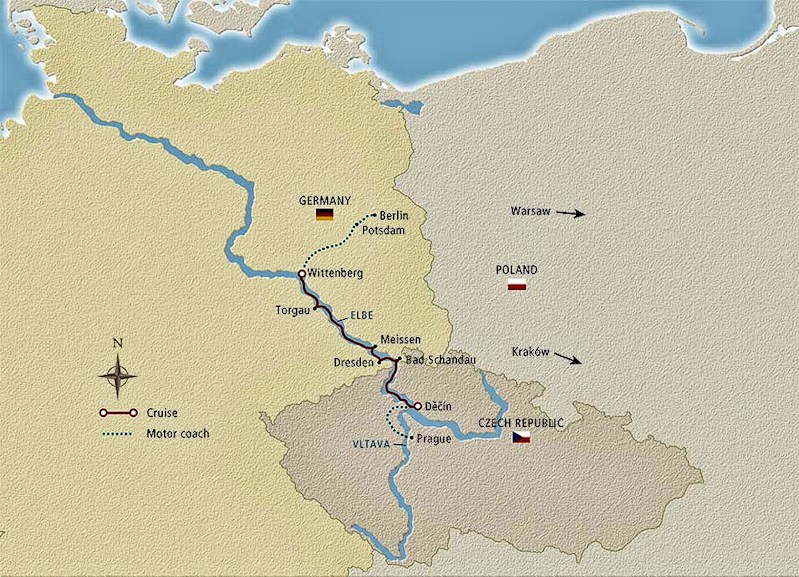 Map of our journey


After our British Airways flight from Heathrow to Tegel, Berlin, we were met at the airport by the Viking representatives and driven to our hotel - the Intercontinental on Budapest Strasse, Berlin.
Once unpacked and settled into our suite, we all met up with Programme Director Rick for a 'Familiarisation Walk' around the area of our hotel - where Rick pointed out a few places to eat etc.
Later, we walked back to the city centre and had a meal, before returning to the hotel.


Following breakfast,  with new friends Les and Elaine we decided to take the number 200 bus (as recommended by Rick) into central Berlin - where we got off the bus and wandered round to take in the sights.
We took a boat trip along the river Spree, walked along the famous Unter den Linden, checked out the Brandenburg Gate, stopped for a few biers, before walking through the Tiergarten back to our hotel.
In the evening, along with Les and Elaine, we dined at a great Italian restaurant just opposite the hotel.

Our first tour of this trip started with a coach journey to the north of Berlin to visit Sachsenhausen Concentration Camp - a sobering but moving experience.
Back from the visit, we took a stroll into a nearby Biergarten for a rest and a few biers before taking the 'Berlin by Night' tour to a restaurant for yet more biers and a meal.

After breakfast it was on board the coach for the 'Panoramic Berlin' tour - taking in Checkpoint Charlie (which I had visited as a youngster in 1972 when Berlin was a divided city).
From there we drove on to see a section of the Berlin Wall - now a tourist attraction - before driving round the former airport of Templehof - scene of part of the Berlin Airlift.
Finally, we were taken by coach around the Reichstag, Brandenburg Gate, Unter den Linden and the Jewish Holocaust Memorial, before returning to our hotel.
The evening was taken up with a 'Brewery visit and Dinner' - where the Braumeister (a Brazilian) explained the brewing process and provided samples of light and dark brews to accompany our meal.

After checking out of the Intercontinental, we boarded our coaches for the trip to Sanssouci Palce - Frederick the Great's place. Our guide was British - Bridget who was very knowledgeable and showed us around the oppulent interior.
From Sanssouci, we were driven to the Cecilienhof Palace - scene of the Potsdam conference of 1945. From the palace we drove into the town of Potsdam for some free time.
After a delicious snack of Currywurst and Fries, Les and I had a couple of Biers while the ladies went shopping.
From Potsdam, we drove to Wittenberg to finally board our cruise ship at 16:00 - the Viking Beyla.
After our cases were brought on board and we had unpacked, we were invited to meet the Captain and crew for a toast, after which we had a 'Welcome Briefing' before sitting down our first dinner on board.

On the coach by 08:45 for the short drive into Wittenberg - home town of Martin Luther - for the 'Walking Tour', led by our guide.
After visiting all the various sights, we were given half an hour's free time - so Kay went shopping!
Back on board by 12:30, the Viking Beyla cast off and after a light lunch at 14:00 we took part in compulsory safety drill where we donned our life jackets and assembled at our muster station on deck.
I took up the offer to visit the wheelhouse where the Captain showed us all hi-tech equipment.
After various on-board entertainments, followed by dinner at 18:00, we arrived at Torgau at 20:00, where we went ashore for an 'Evening Stroll' guided by Programme Director Rick.

Having cast off from Torgau in the early hours at 02:30, the morning was given over to various talks and tour briefings before the Beyla arrived at Meissen - where we had a shore excursion to the famous porcelain factory.
After the factory tour we were driven around Meissen to see the sights - before getting off the coach to visit the town square - where Les and I had a welcome bier (and tried, unsuccessfully to order a second) - while Kay and Elain went shopping!
Back on board by 17:15, the evening was taken up with a cocktail party followed by a dinner themed on 'A taste of Germany'.
Rick's Music Quiz in the lounger rounded off another enjoyable day.

Casting off from Meissen at 04:00 the Viking Beyla arrived at our next port of call - Dresden - at 08:30.
We had signed up for the 'Panoramic Dresden' tour, so boarding the coach at 09:00 we were driven into the city where we de-bussed to walk around the sights.
We visited the Zwinger Palace before going inside the Green Vault to marvel at the stunning exhibits.
Les and I went on the afternoon excursion to 'The Working World of Volkswagen' - except that, it being a Saturday, the assembly lines were silent!
Nonetheless, it was an interesting visit - although we were not allowed to take photos of the largely automated assembly line - presumably they were commercially sensitive?
Meanwhile, the ladies, guess what? - went shopping in Dresden.
The final excursion of the day was to an hour-long 'Gala Concert' by the five-piece Dresden Residence Orchestra.
Those that stayed on board were entertained in the ship's lounge by the three-piece Allegria Ensemble - for free!

The Beyla cast off from Dresden at 07:00 for the long cruise to Bad Schandau - passing through some interesting scenery pointed out over the ship's tannoy by Rick.
After passing the rock formation of the Bastei, we sailed on for our next stop at Bad Schandau - where we boarded the waiting coaches for the journey back to the Bastei - where we scaled the steep steps and pathways - along with zillions of other tourists - before climbing back up to the cafe for a welcome bier!
The Beyla cast off at 17:30 for Děčín in the Czech Republic (or Czechia as it is now, apparently called) - arriving at 20:30.
We had attended the Captain's Cocktail Party and Final Farwell talk by Rick before having our last evening meal on board at 19:00.

This is the day we depart the Viking Beyla for our hotel in Prague. We had to place our luggage outside the stateroom by 07:30 and vacate the room by 08:30 to board the relevant coach.
The journey to Prague took about 1.5 hours and on arrival at the hotel Corinthia we were re-united with our luggage in our room.
We had planned to go on the 'Prague Old Town and Castle Walk' at 10:30, but as it was pouring down with rain, we opted out and met up with Les and Elaine in the hotel bar.
The weather brightened up a bit in the late afternoon, so we took the hotel shuttle bus into Prague centre for wander around the Old Market and Charles Bridge before returning to the hotel.

The weather was much improved so the four of us took the shuttle bus into the city centre and walked along the banks of the Vltava river before crossing the bridge for the long walk up the incline to Prague Castle. After queuing for security checks, we passed through into the castle - where we separated, Les resting in a small restaurant, whilst the ladies explored the open market and I struggled with my failing camera to take a few photos.
I joined Les for a couple of biers and when the ladies arrived we all had a nice lunch with a great view from the restaurant balcony.
After lunch, we descended the steep slope into Lesser Town, before crossing Charles Bridge to make our way back to the Old Market to catch the shuttle bus to the hotel.
In the evening we went on the 'Prague by Night' tour - by coach around the various sights, stopping off for a bier tasting and a visit to the Television Tower - with it's panoramic views over the city.
By this time my camera had given up the ghost so no photos of the night tour.

Time to pack our bags and check out of the hotel to be driven to Prague airport for our 11:15 flight back to Heathrow.
This was a great cruise - with plenty to see and do. It was made more enjoyable by the friendliness of the crew - especially the comedic banter of Programme Director Rick who kept us all in stitches throughout the tour.

Meeting up and making friends with Les and Elaine was the icing on the cake.