Kay and Ken's cruise up the Dnieper.

(from Odesa to Kiev) 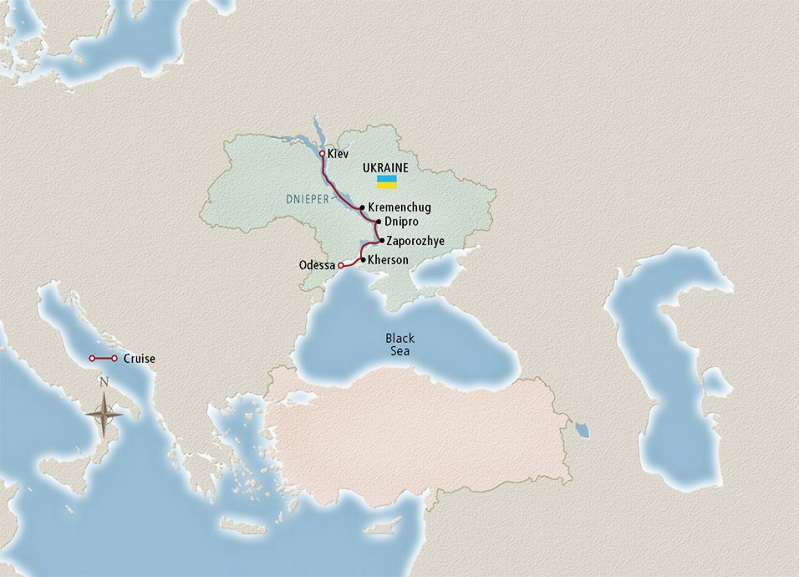 Link to a Ships Portrait of the Viking Sineous


After our British Airways flight from Heathrow to Vienna, we were met at the airport by the Viking representatives and driven to our hotel - the Intercontinental.

Once unpacked and settled into our suite, we took a walk into the Stadtpark opposite, sat and had a beer and watched the world go by.

Later we walked into the city and had a meal at a paveside Greek restaurant, before returning to the hotel.

Following breakfast,  we decided to take the various bus tours around Vienna - so purchased an all-day ticket and hopped on the tour bus - getting on and off at various points and changing routes to take in the three available routes.

In the evening we dressed up and strolled through the park to a restaurant that had been recommended to Kay - the Plachutta - where we dined on the famous Tafelspitz.

After an early breakfast, we checked out of the hotel and were coached to Vienna airport for our 09:55 Austrian Airlines flight to Odesa - arriving at 12:45.

We were met by the Viking reps at Odesa airport and taken by coach to our cruise ship - the Viking Sineous - moored at the port in Odesa.

After unpacking in our cabin, there was no time to relax before we went on the organised 'Welcome Walk' around the city - starting up the famous 'Potemkin Steps' - although we wimped out and took the funicular up to the top.

After exchanging some currency and having a beer in a local pavement cafe, it was back down the steps and back to the jetty for a short stroll before boarding the Sineous in time for dinner.

After breakfast it was on board the coach for a short trip into the city - we had signed up for the 'active version', which involved a walking tour around Odesa.

Along the tree-lined Prymorski Boulevard, stopping at various places pointed out by out guide Nina, we took in the sights before meeting up with our coaches to be taken to the Transfiguration Cathedral, where we got off to visit the place - before re-boarding for the journey back to the Viking Sineous for lunch.

The afternoon excursion was a visit to the Catacombs - a warren of tunnels used by the resistance during the war to hide from - and harass - the occupying Romanian troops.

An early 8am start for the 2 hr 30 min drive to see the medieval fortress at Bilhorod-Dnistrovskyi.

Travelling south we crossed the narrow strip of land separating the Dniester Estuary from the Black Sea over a lift bridge at the resort town of Zatoka, which was teeming with holidaymakers enjoying the hot weather.

As we approached the Akkerman Fortress, the skies darkened and we drove through a torrential downpour - which flooded the streets of the local town.

We did think we may have to forego the visit to the fortress, but the skies cleared just in time and we had an interesting visit.

Back on board the Sineous for lunch, we declined the afternoon visit to a local market and took a stroll along the jetty taking in the sights and had a welcome ice cream whilst watching the world go by.

We didn't want to go on the 'Odesa Art Museum Tour' - so we had a lazy morning strolling along the jetty taking in the atmosphere and sights.

The afternoon excursion was to 'Jewish Odesa' - where we decanted from the coach to visit a couple of Synagogues and a Holocaust memorial.

Later in the evening we had signed up for the 'Ukrainian National Folklore Dinner' - which turned out to be a bit disappointing.

We were expection some Cossack dancing (from the photo in the tour brochure), but instead, we were tightly packed into the restaurant to listen to some traditional singing and eat a set menu of meats and tasties.

The blurb had said "Immerse yourself in the world of Ukrainian cuisine while enjoying a traditional folk atmosphere during dinner" - but no immersion was forthcoming.

Back on the Sineous by 10:45pm - we cast off at 11 pm and sailed into the Black Sea towards the mouth of the River Dnieper.

At 09:45 the Viking Sineous arrived at Kherson - 'Cradle of the Black Sea Fleet' - where we met up with the four coaches and drivers that had travelled up overnight from Odesa.

At 10:00 we boarded our allocated coach for the shore excursion - driven to and getting off to visit various cathedrals and memorial sights.

Back on board for lunch, the Sineous cast off at 1:00 pm as we set sail for Zaporozhye.

At 3:00pm there was a presentation by Program Director Oliver on Ukraine History - which lasted all of 10 minutes!!!

4:00 pm saw us up on the Sun Deck for 'Ukrainian Teatime' - cold tea or coffee and a variety of Ukrainian pastries.

A little later we arrived at the Kahovskaya Hydroelectric Powerplant and our first lock - with a rise of 48ft - which took us into Kakhovka Reservoir.

The Viking Sineous arrived at Zaporozhye at 08:45 and, by 09:00 it was onto the coaches for our shore excursion entitled 'Zaporozhye Highlights'

This involved a coach trip though the city with a stop at Mayakovsky Square to see the fountains and rock sculptures - followed by a trip to Khortitsa Island to visit a re-creation of a Cossack settlement.

Back on board for lunch - after which was another trip to Khoritsa - this time billed as the 'Island of the Cossacks' - for a live demonstration of horse riding and weaponry skills.

I managed to avoid being 'volunteered' as a stooge for the bullwhip demonstartion - luckily that fell to others in our party.

We had to be back on board by 17:30 as the Viking Sineous was due to depart for our next port of call.

The Viking Sineous arrived at Dnipro in the early hours while we slept - so we awoke to find us moored at a rather dilapidated terminal - where our four coaches were waiting - having driven up overnight from Zaporozhye.

Boarding the coach at 9:00 am for the 'Dnipro Highlights' excursion, we travelled through the city taking in the sights before being dropped off at the 'Museum of War in Donbas' - recently opened to commemorate the conflict with Russia in Eastern Ukraine.

Next on the agenda was a visit to the Historical Museum, after which those so inclined walked to visit a church before meeting up with the coaches at the Central Park of Culture

I declined the walk and went with our coach and wandered round the park waiting for the walkers to arrive.

Back to the Sineous for lunch, we had declined the excursion to the 'Petrykivka Folk Art Centre', so stayed on board for the afternoon.

In the evening, we nearly missed the Ukrainian Folklore Music entertainment in the Sky Bar - arriving late, so we were at the back and couldn't see much.

The Sineous set sail at 01:00 am passing through the lift bridge - which only opens once a day at the set time.

As this day involved a lot of cruising, a 'wheelhouse tour' was arranged for those who were interested - so in batches of around a dozen passengers we visited the Viking Sineous wheelhouse to be greeted by the captain and crew.

We asked a few question about the various modern instruments on view and spent an interesting 15 minutes there.

At 10:30 there was a 'Cooking Demo' on the Sun Deck - where ships Chef Lena asked for two volunteers to help her make 'Varenki' - a local pasta delicacy.

This was followed by a tasting of the varenki - washed down with very weak cold tea - and a song and dance.

At 11:30 we were invited to the Sky Bar for a presentation of  'Ukrainian History Today' by Program Director Oliver - but disappointingly, it only kasted 10 minutes!

We arrived at Kremenchug and docked at 14:30 to board our coaches for the shore excursion 'Kremenchug Perspectives & Home Hosted Visit'.

This involved a drive through the city to the village of Omelnik - where the four coaches were each allocated a local house to visit and soak up the atmosphere of local life.

Our visit was hosted by widow Valentina and her grandaughter Paulina who spoke English.

I had expected a sit down buffet of local produce and a chance to interact with our hosts - like on our Russian trip the Uglich - but we were offered a drink of cordial and some crsip-like biscuits and just wandered round the garden trying to think of questions to ask.

I thought the whole thing was all a bit contrived and awkward - but maybe that's just me.

Back on board by 17:45, the Viking Sineous set sail once more - but we hadn't signed up for the 'Red Caviar & Wine Reception' - so missed that.

We did attend the 'Music Quiz' later that evening in the Sky Bar - and came second as I recall.

After breakfast we attended the 'Disembarkation' briefing at 10:30 - to learn details about leaving the ship on Sunday morning.

After lunch, the Viking Sineous arrived at the passenger terminal where we berthed - and in the afternoon went on our first excursion called 'Panoramic Kiev and Monastery of the Caves'.

Following a drive through the city centre, we arrived at the monastery to see the magnificent cathedrals and churches inside the complex.

Those who felt fit enough then descended a steep cobbled street to visit the famous caves - where we were ushered through, unable to take photographs in the dimly lit cavern.

Emerging into the daylight we then climbed back up the cobbled street to the exit to board our coaches for the next stop.

This was St Sophia's Cathedral - another 'No Photographs' place - so I sat outside in the sunshine and waited for the rest of our party to emerge.

We then walked as a group back across a large open square, past St Michael's Monastery and down 'St Andrew's Descent' - a winding cobbled street with lots of interesting buildings and the inevitable souvenir stalls - before reaching 'Contract Square' - from where we walked back to the passenger terminal to board the ship.

After dinner we attended the evening shore excursion - another 'Ukrainian National Folklore Dinner' - this time in a better restaurant than Odesa, where we were entertained by a bare chested male baritone, accompanied by two ladies in national costume.

Back on the coach by 10:15 for the short journey back to the ship.

The last full day of our cruise was spent on an excursion to the 'Pirogovo Folk Architecture Museum' - a collection of more than 200 wooden structures relocated and rebuilt from all over Ukraine.

There were a number of 'Optional' excursions in the afternoon - all of which we had declined. I took the afternoon off to go by taxi to Zhulaniy airport to visit an aviation museum

I had been to the museum previously, but they had a new exhibit that I was keen to see - a rare, one-ff Antonov An-71 - so the ships reception organised a taxi to take me there and collect me later.

Kay went on a quickly arranged visit via the Metro to a food market and apparently had a great time.

On our last morning, the packed suitcases had to be outside our cabin - with a colour-coded label - by 09:00 ready to be collected.

We had to kill a few hours after breakfast before boarding our coach at 11:00 - having identified our cases to be loaded - for the long drive to Kiev's Borispol airport.

The flight was uneventful - except that the snacks ran out from the trolley - I got the last bacon roll. Not a good advert for British Airways with a lot of disgruntled passengers.

Although we had left Heathrow by BA from terminal 3, we landed back at terminal 5 - so had the added inconvenience of having to get the underground shuttle from T5 to T3 - to catch the shuttle bus to where my car was parked.

Another good cruise in good company to a fascinating country - highly recommended.